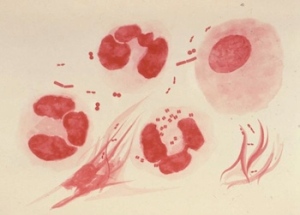 The most commonly acquired sexually transmitted infections (STIs) in the U.S., chlamydia and gonorrhea, are usually cleared out swiftly and easily with a dose of oral antibiotics. But one of these infections is growing bold and finding ways to evade treatment.

More than 321,000 cases of gonorrhea are reported each year in the U.S. alone—and the actual number of annual infections is probably much higher because many people do not experience symptoms. The infection has lost much of its social stigma since antibiotics were enlisted to fight it off earlier last century. But left untreated today, it can still cause pelvic inflammation, severe pregnancy complications and female infertility. Its presence increases the odds of an infection with HIV, and babies born to women with untreated gonorrhea are at risk of blindness.

Although antibiotics have reduced this infection to little more than a modern-day inconvenience for most, the bacterium (Neisseria gonorrhoeae) has been steadily evolving to knock out medical weapons. Sulfonamides ceased to be effective in treating it in the 1940s; penicillins and tetracyclines lost effectiveness in the 1970s and ’80s; and fluoroquinolones were taken off the treatment table in 2007.

The last simple treatment, a class of antibiotics called cephalosporins, appears to be weakening against gonorrhea infections worldwide. And that drug resistance has now reached North America in sizable numbers, according to a new study, published online January 8 in JAMA, The Journal of the American Medical Association.

Resistance to the commonly prescribed oral antibiotic cefixime (a cephalosporin) was first detected several years ago in Japan. Since then, public health officials have been watching the phenomenon spread to Europe and now to North America.

For the new study, researchers led by Vanessa Allen, of Public Health Ontario, examined people who were treated for gonorrhea with cefixime at a clinic in Toronto. The clinic required people to come in for a follow-up appointment two to four weeks later to make sure their infection had been cleared; it also surveyed patients about whether they might have been exposed to the infection since their initial visit. These practices allowed the researchers to gather data on how often the drug failed to work.

Of 133 patients who received treatment and returned for their follow-up appointment for testing, 6.77 percent had failed to respond to treatment, which corresponds to about one in 15 infections. Drug-resistant gonorrhea has officially arrived in North America.

Other experts in the field call “its arrival deeply troubling; clinicians now face the emergence of cephalosporin-resistant N. gonorrhoeae without any well-studied, effective backup treatment options,” observed a team of researchers led by Robert Kirkcaldy, of the Division of STD Prevention at the CDC, in an essay published in the same issue of JAMA. And, they noted, as there is no proven alternative treatment waiting in the drug development wings, “the antibiotic pipeline is running dry.”

And our ability to track this spreading resistance has actually been hampered by the advent of rapid genetic screening. Traditional tests grew cultures of the bacteria in the lab, which could then be analyzed for strain variety and resistance profiles. Genetic testing, however, just detects the presence of the infection without revealing further details. A survey completed in 2007 showed that even then only about 5 percent of US laboratories tested for gonorrhea via culture. And follow-up tests after treatment are not technically recommended for most cases.

The clinic used in the study might present a higher-than-average rate of gonorrhea infection in general because many of its patients are men who have had sexual encounters with other men, a population that, so far, has shown a higher rate of infections with genetic propensity to resist antibiotic treatment.

Previous research had pinpointed the presence of genes in U.S. cases that would indicate a possible resistance to cefixime. But this study was able to establish the rate at which the drug actually failed to treat the infection.

In light of growing drug-resistance worldwide, the U.S. Centers for Disease Control and Prevention (CDC) recently recommended clinicians no longer prescribe a single antibiotic treatment. Instead, they now advise that patients receive an injection of ceftriaxone as well as a week-long course of oral azithromycin or doxycycline. Kirkcaldy and his colleagues also recommend that, “all patients treated for gonorrhea should be given risk reduction counseling, offered condoms and retested for gonorrhea three months after treatment,” they noted in their essay.

“Clinicians must remain vigilant for cephalosporin treatment failures and report suspected cases to the local or state health department,” Kirkcaldy and his colleagues wrote. “Patients with persistent or recurrent symptoms shortly after treatment should be retested for gonorrhea by culture.”