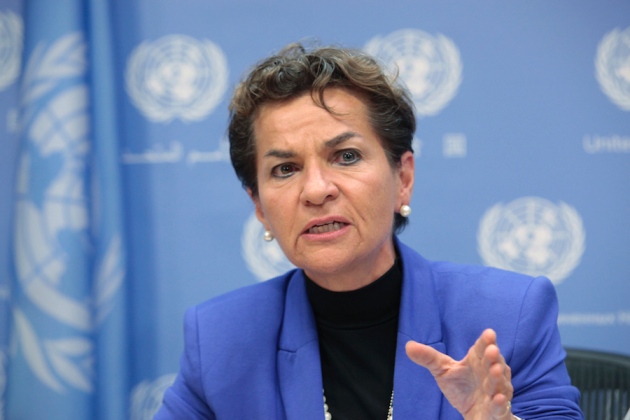 As world leaders prepare for international climate talks next month in Paris, the United Nations climate chief has said that emissions pledges made so far will not keep the planet’s average temperature within 2 °C of pre-industrial levels — the goal that politicians have agreed on to prevent the most dangerous effects of global warming.

“That so many countries are now engaging in the fight against climate change is a remarkable step, and their pledges are a first important deliverable to Paris,” said Christiana Figueres, executive secretary of the United Nations Framework Convention on Climate Change (UNFCCC). “But although we’re moving in the right direction, it is clearly not enough.”

Figueres was speaking at the launch of a report synthesizing the aggregate effects of all pledges to reduce emissions, submitted by parties to the UNFCCC and covering 146 countries as of 1 October. The promises — called Intended Nationally Determined Contributions (INDCs) — are voluntary. If fully implemented, they would slow the growth in global emissions of carbon dioxide, preventing the emission of 4 billion tonnes annually by 2030. They would also cut per-capita carbon emissions by 9% compared to 1990 levels, the report finds.

But without any further action, this would put the global average temperature on track to warm by 2.7 °C by 2100, Figueres said.

The report will come of no surprise to scientists or environmental groups who had already warned that the pledges were far from sufficient. Although negotiators in Paris will hope to reach an international deal on the basis of existing promises, Figueres says that it is just as important that any agreement include language ensuring periodic reviews, and a consideration of next steps. “What we need are progressive incremental efforts — reviewed every two years or so — that will lead the world on a path towards two degrees,” she said.

Industrialized nations and developing countries alike must step up their efforts to that end, says Sebastian Oberthür, a climate-policy researcher at the Dutch-speaking Free University of Brussels.

“No country or bloc can afford to pause and say they’ve done enough," he says. "But global climate action would no doubt gain momentum if one big player — the United States, the European Union, or less likely, China — took the lead in setting more-ambitious domestic targets, and channelling aid and know-how to poorer countries.”

Whether the submitted INDCs will become internationally legally binding is still up for debate. The European Union is in favour of mandatory targets, but many countries find that idea difficult to accept.

Some policy specialists fear that the patchwork of intended individual commitments will remain ineffective in the absence of compliance mechanisms and without a global carbon price or cap-and-trade system. But voluntary targets that stem from national interests might have a better chance of being implemented than anything mandatory, says Figueres.

One-quarter of the INDC pledges are conditional on receiving financial and technical support from other nations greenhouse-gas reductions and climate-change adaptation. Potential donor countries must stick to their promise to collectively provide some US$100 billion per year by 2020 in climate financing obtained through private and public means, said Jochen Flasbarth, a state secretary for Germany's federal environment ministry. Germany has committed to providing a 10% share of those funds, he said.

He and Figueres hope that Germany’s ambitious renewable-energy plan could serve as an example for other countries. “The world is starved of good examples of how to get out of fossil-fuel dependence,” says Figueres. “Industrialized countries will never be excused of not taking action at home. But they must also help developing countries reduce their growing emissions.”