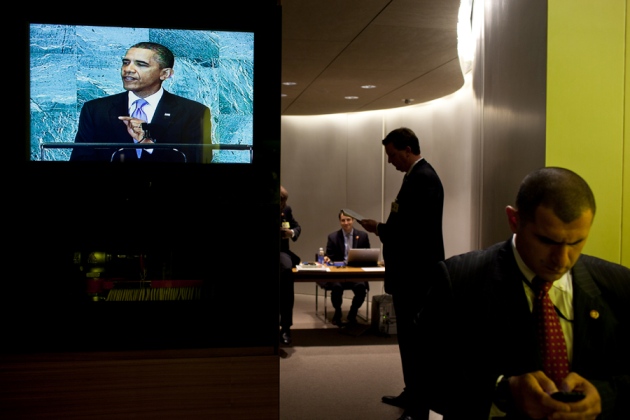 US president Barack Obama, shown during a 2011 visit to the United Nations, will attend a UN climate summit on 23 September.

When the United Nations Climate Summit begins on 23 September in New York City, US President Barack Obama will be there. But many of his counterparts from other major greenhouse-gas-emitting countries — including China, India, Germany and Australia — plan to stay at home. Still, the meeting could offer important clues to how a UN push to forge a new international climate pact by the end of 2015 will play out.

Approved in 1992 at the Earth Summit in Rio de Janeiro, the Kyoto Protocol is the only legally binding international treaty governing greenhouse-gas emissions. Parts of it expired at the end of 2012, and efforts have since been afoot to develop a new pact, as demanded by the 22-year-old United Nations Framework Convention on Climate Change (UNFCCC).

The New York meeting is not part of the formal process to shape a newinternational climate treaty. Instead, the gathering was conceived by UN secretary general Ban Ki-moon as a way of marshalling enthusiasm for the effort, which is set to conclude in Paris in December 2015; any agreement would take effect in 2020.

International climate negotiations have a long and chequered history. The Kyoto Protocol was never ratified by the United States, did not require rapidly developing countries to reduce their emissions and was rejected by Canada and Russia as the first round of emissions-reductions commitments expired in 2012.

In the meantime, the world’s output of carbon dioxide and other heat-trapping gases has continued to rise. The level of CO2 in the atmosphere reached 396 parts per million in 2013, 42% higher than pre-industrial levels. Last year’s was the largest annual increase since 1984, according to figures reported on 9 September by the World Meteorological Organization in Geneva, Switzerland.

Climate negotiators face sticky questions as they work to craft a new agreement. Some are basic: will the Paris treaty be legally binding? Others are more complex and long-standing. Many developing nations, for instance, worry that carbon cuts will jeopardize their economic progress. The challenge is formidable, says Nicholas Stern, a climate-change economist at the London School of Economics. By 2030, Stern says, the world must reduce its greenhouse-gas emissions by roughly 20% from the current level to have a chance of limiting warming to 2 °C above pre-industrial temperatures, the UNFCCC’s stated goal. Current emissions pledges put the world on track for a 3 °C warming by 2100, according to a 7 September report by PriceWaterhouseCoopers.

Yet climate-policy experts insist that there is reason for optimism heading into the New York meeting. “We need to stop judging climate action by whether we get a so-called legally binding treaty,” says Paul Bledsoe, senior fellow at the German Marshall Fund in Washington DC and a White House climate-change official under former president Bill Clinton.

Bledsoe sees signs of meaningful progress by major emitters such as China. The country has enacted a cap-and-trade programme to reduce greenhouse-gas emissions in seven provinces and increased its investment in renewable energy. The world’s leading greenhouse-gas emitter is also considering a ban on coal-fired electricity generation in the Beijing area to address air-quality concerns. The move would be an important step away from the form of power generation that produces the most greenhouse-gas emissions.

There are also signs of progress in the United States, the second-largest emitter of greenhouse gases, says David Waskow, director of the international climate project at the World Resources Institute in Washington DC. Obama is using his executive power to enact policies that reduce greenhouse gases — bypassing Congress, which has long stymied any plan for emissions reductions. Waskow points to Obama’s proposal, unveiled in June, to cut greenhouse-gas emissions from existing power plants, which produce 38% of the country’s total. The United States already regulates emissions from automobiles and is working to finalize limits for new power plants.

Although India’s prime minister, Narendra Modi, will not be attending, the stance of India’s representatives to the New York summit could yield clues to the country’s climate policy. Modi took office in May and championed renewable energy during more than a decade as chief minister of Gujarat state. “It’s a new government, and they haven’t had a lot of time to sink their teeth into this,” says Jake Schmidt, director of the international climate programme at the Natural Resources Defense Council in Washington DC. “India is a big unknown.”

But the true test of progress towards a new treaty will not come until March, when nations are required to submit their national greenhouse-gas reductions goals to the UNFCCC. “That is really the timeline to keep an eye on,” says Waskow.