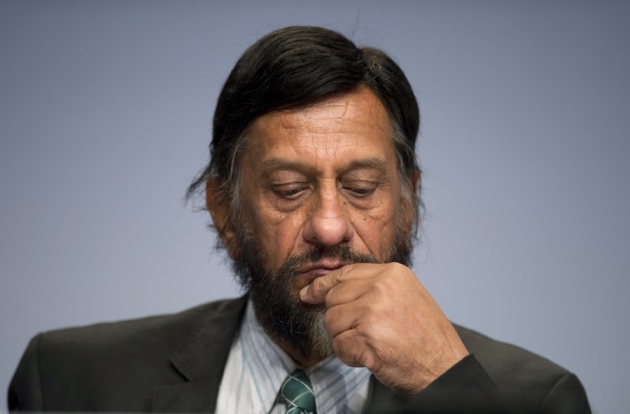 Rajendra Pachauri became chairman of the Intergovernmental Panel on Climate Change in 2002.

Rajendra Pachauri resigned as head of the Intergovernmental Panel on Climate Change (IPCC) on 24 February amid accusations of sexual harassment.

The IPCC says that Ismail El Gizouli, its vice-chair, will serve as acting chairperson for the organization’s session in Nairobi this week, where it is scheduled to agree on the structure of the IPCC’s future leadership.

“We are in the middle of a debate about the future of the IPCC,” says Ottmar Edenhofer, co-chair of the IPCC working group on climate-change mitigation and chief economist of the Potsdam Institute for Climate Impact Research in Germany. “The circumstances of Pachauri’s resignation are sad — but the IPCC is in a position to continue its successful work and implement whatever changes might be needed to meet new demands from policy-makers and society.”

Pachauri became chair of the IPCC in April 2002, and had been scheduled to complete his second — and, by IPCC rules, last — term in office in October, automatically triggering an election. IPCC vice-chair Jean-Pascal van Ypersele, a climatologist at the Catholic University of Louvain in Louvain-la-Neuve, Belgium, announced his candidacy for the leadership position last year.

Van Ypersele says that the leaders of two of the IPCC's three main working groups have also said that they are expecting to run in the October election: Chris Field, a grassland ecologist at the Carnegie Institution for Science in Stanford, California, co-chairs the group on adapting to climate change; Thomas Stocker, a climate scientist at the University of Bern in Switzerland, co-chairs the group on climate science.

On 13 February, a colleague at The Energy and Resources Institute (TERI) in New Delhi, which Pachauri directs, filed accusations of sexual harassment against him. On 23 February, the IPCC had said that the 74-year-old would be unable to chair the Nairobi meeting “because of issues demanding his attention in India”.

Pachauri, who has denied the harassment allegations, made no direct reference to them in his resignation letter dated 24 February. “The IPCC needs strong leadership and dedication of time and full attention by the Chair in the immediate future, which under the current circumstances I may be unable to provide, as shown by my inability to travel to Nairobi to chair the plenary session of the Panel this week,” he wrote.

Through a spokesman, he declined Nature's request to comment on his resignation. Pachauri has also told TERI that he will take an immediate leave of absence, according to an e-mail to TERI staff that was posted on Twitter.

Several researchers praised Pachauri's tenure at the climate group's helm, which was marked by the publication of two major reports — and controversy. He weathered criticism in 2010 when the IPCC admitted to erroneous statements in its 2007 report, including a section that claimed that Himalayan glaciers were likely to melt completely by 2035. In the same year, Pachauri withstood pressure to resign from the IPCC because TERI had ties with companies that could benefit from climate polices; an independent audit found no evidence of conflicts of interest.

“He had his very own style of chairing the IPCC — but he was a very effective leader,” says Gabriele Hegerl, a climate scientist at the University of Edinburgh, UK.

Bob Ward, a policy director at the London School of Economics' Grantham Research Institute on Climate Change and the Environment, says that Pachauri's resignation should have little impact on IPCC operations because the group was already preparing to select a new chairman.

He adds that Pachauri was an “effective advocate” for the IPCC during his 13 years in charge. “He was mainly criticized for being too active in policy debates, and I don’t think he should feel apologetic for that,” says Ward. “The criticisms were mainly from climate sceptics who didn’t want to see an effective IPCC chair.”