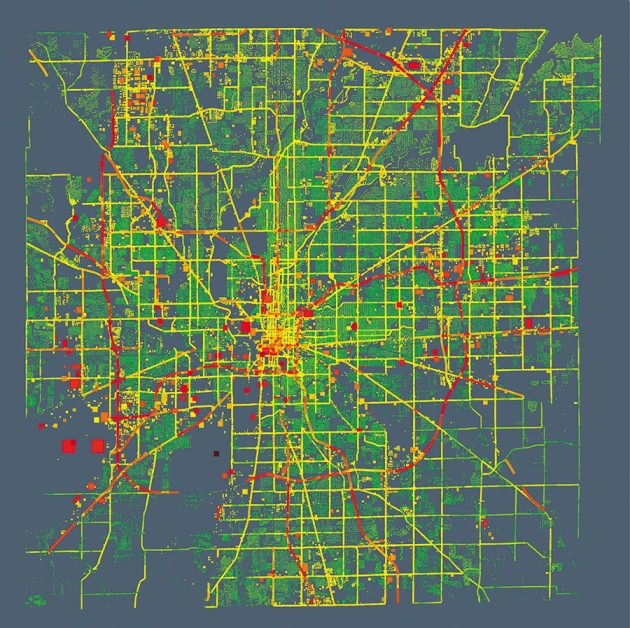 A visualization of carbon dioxide emissions data from Marion County, Indiana, shows that large buildings and main roads (red areas) emit the most.

Cities are taking steps to combat climate change, given the scant progress made by international treaty negotiations. Los Angeles, California, home to around 4 million people, has one of the most ambitious targets: to reduce greenhouse-gas emissions by 35% below 1990 levels by 2030. The city has calculated its carbon 'footprint' and found that road vehicles constitute 47% of total carbon dioxide emissions, and that electricity consumption constitutes 32%1. So how should Los Angeles target its policies?

Knowing that certain roads, types of vehicle or parts of a city dominate road emissions and why people drive at specific times would tell city planners where and how to lower emissions efficiently. Improvements in traffic congestion, air quality, pedestrian conditions, and noise pollution could be aligned. But tracking emissions road by road and building by building is beyond the capacity of most cities.

Luckily, scientists are gathering the data that city managers need — in studies that match sources of CO2 and methane with atmospheric concentrations. Now the research community needs to translate this information into a form that city managers can use. Emissions data need to be merged with socio-economic information such as income, property ownership or travel habits, and placed in software tools that can query policy options and weigh up costs and benefits. And scientists should help municipalities to raise awareness of the power of detailed emissions data in tailoring climate and development policies.

Cities account for more than 70% of global fossil-fuel CO2 emissions, the main driver of climate change. If the top 50 emitting cities were counted as one country, that 'nation' would rank third in emissions behind China and the United States2. Urban areas are set to triple globally by 2030 (ref. 3).

Much of this emitting landscape falls within the control of mayors, city planners, businesses and community groups that have responsibility for residents' health and well-being. A 2014 survey lists 228 global cities — representing nearly half a billion people — that have pledged reductions equivalent to 454 megatonnes of CO2 per year by 2020 (see go.nature.com/inaxr4). Shenzhen in China, for example, aims to put an extra 35,000 electric vehicles on the road by the end of 2015. The German city of Munich aims to produce enough green electricity by 2025 to meet all its power requirements.

Yet such pledges account for only about 3% of global urban emissions and less than 1% of total global emissions projected for 2020 (ref. 4). Rich cities dominate these pledges, yet low- and middle-income countries are experiencing the greatest urban growth. 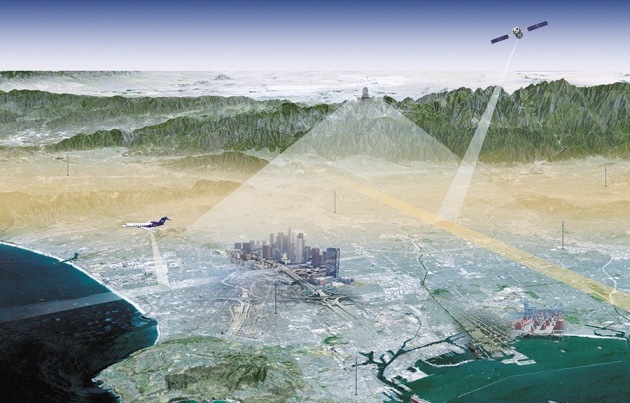 The Los Angeles Megacities Carbon Project will measure urban carbon levels from the ground and sky.

Slashing emissions requires mapping them on finer scales of space and time that reflect the human dimensions at which carbon is emitted: by individual buildings, vehicles, parks, factories and power plants. These should be tracked at least yearly. Such granular estimates are needed for several reasons: to verify emissions rates; to confirm progress towards reduction and support carbon trading, permits or taxation5; to enable more-targeted and financially efficient decisions about mitigation options6; and to identify and fix unintentional releases from, for example, leaking gas pipes or malfunctioning methane-capture equipment in landfills.

Although methods to account for community-scale emissions have been designed by non-profit organizations such as the World Business Council for Sustainable Development and the World Resources Institute (see go.nature.com/q7wjeb), most cities lack independent, comprehensive and comparable sources of data. The expertise and staff required to build this information are costly. Transparency of data and methods is also crucial to enable verification by third parties and to build trust.

Scientists are starting to meet these challenges. In the past five years, 'bottom-up' estimations of carbon emissions from fuel reporting, traffic data, building information and human activity are being merged with 'top-down' atmospheric measurements over cities of CO2, methane and 14CO2 — an isotope of CO2 that reflects fuel combustion7. Such efforts began in the late 2000s in Paris and in the US cities of Indianapolis, Boston, Salt Lake City and Los Angeles; more are planned for São Paulo, Brazil, and cities in Australia, China, the United Kingdom and Canada. These studies cost millions of dollars, and involve at least a dozen monitoring sites and analysis of remotely sensed data and modelling efforts. Many of these data sets are now publicly available.

Links between ground-based and satellite remote sensing are improving. For example, Japan's Greenhouse Gases Observing Satellite (GOSAT) has shown8 that spaceborne CO2 measurements can constrain the 'domes' of the gas that lie above cities. This work will continue with NASA's Orbiting Carbon Observatory 2 (OCO-2), which launched in July 2014.

“The measurement, monitoring and modelling of urban carbon flows is a global need.”

Future space missions (such as OCO-3, planned for 2018) will have a 'city mode' that will monitor urban areas and power plants monthly. The European Space Agency's Sentinel-5 mission (to launch in 2016) should provide near-global measurements of large methane emitters on the urban scale every few days or weeks. Work is also under way to characterize infrastructure in high-resolution images. Complemented by ground-based information such as traffic data from mobile phones, this could reveal, for example, which types of building or location account for disproportionate urban emissions and why.

Much needs to be known to make the science suitable for policymakers and planners. For example, what level of granularity and accuracy is most useful? How many atmospheric monitoring stations are sufficient to calibrate or anchor emissions inventories? How does this scale with city size or types of emission (road versus industrial, say)?

Existing information systems are cumbersome, and although good at quantifying emissions, they are unable to explain the roots and controls of carbon flows. Researchers need to understand the relationships between urban carbon fluxes and the social norms, technology, economics and institutional constraints that drive emissions. This is especially important in low- and middle-income countries.

More collaboration among disciplines is needed. For example, engineers have modelled how emissions change when transit systems or compact urban development strategies are introduced. But technological and infrastructure changes are rarely modelled within socio-ecological systems9. Social scientists are examining the connections between wealth, population size or density and carbon emissions10, but not within realistic, economically constrained, engineered landscapes.

Translating urban carbon science into solutions requires two key steps. First, it must become 'operational'. Like weather stations, data and forecasting, the measurement, monitoring and modelling of urban carbon flows is a global need that is best accomplished collectively. This requires long-term collaborative funding and institutional support beyond the typical three-year research-grant cycle.

Second, an independent intergovernmental centre (with regional representation) is needed to ensure standardization and priority. This could be funded jointly by governments, foundations and intergovernmental institutions. Such an 'urban carbon solutions centre' must generate practical results, tools and carbon-mitigation options with the involvement of community groups, mayoral staff and energy providers. Cities could pay the solutions centre to provide information tailored to their locale. Some work could be undertaken by the private sector.

With detailed knowledge of carbon flows, cities might succeed in reducing global emissions where nations have failed.