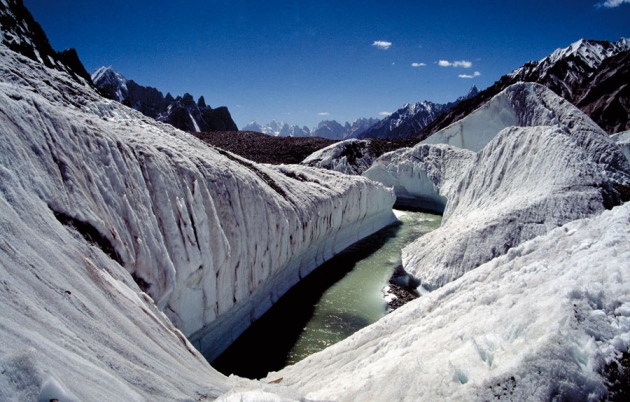 The Baltoro Glacier in the Karakoram mountain range feeds the river Indus.

Running 2,000 kilometres from east to west and comprising more than 60,000 square kilometres of ice, the Hindu Kush–Karakoram–Himalayan glaciers are a source of water for the quarter of the global population that lives in south Asia. Glaciers are natural stores and regulators of water supply to rivers, which, in turn, provide water for domestic and industrial consumption, energy generation and irrigation.

Ice cover is decreasing in this region, as for most glaciers in the world, as a result of global warming. Between 2003 and 2009, Himalayan glaciers lost an estimated 174 gigatonnes of water1, and contributed to catastrophic floods of the Indus, Ganges and Brahmaputra rivers. Pollution is accelerating the melt. An 'Asian brown cloud', formed from the 2 million tonnes of soot and dark particles released into the atmosphere every year, mostly from India and China, warms the air and surface ice2.

Seasonal meltwater serves as the main source of power for an increasing number of hydroelectric dams on the rivers served by the glaciers. But hydropower faces a difficult future in south Asia because of climatic, environmental and politico-economic factors. The region is starved of energy, and power shortages of up to 20 hours a day are stunting development. Importing oil and gas from the Gulf, Iran or Tajikistan is expensive or politically difficult. So countries are turning to indigenous hydroelectric power, and to other renewable energies such as solar and wind, for cheap, sustainable energy.

Hydroelectric power must play a part in south Asia's low-carbon energy future. But to be effective, governments around the Himalayas need to work together to measure and model glacier retreat, changing river flows and their impact on hydroelectric power generation. Political obstacles to dam construction and watershed management must also be overcome.

Glaciers feed thousands of miles of rivers in Pakistan. The largest, the river Indus, depends on glacial waters for up to half of its flow. But near the river's source, in mountains in the Indian-administered state of Jammu and Kashmir, the glaciers are thinning at an alarming rate of 0.7 metres per year3. The Ganges and Brahmaputra rivers in India and Bangladesh are similarly threatened by glacial melting in the regions of their headwaters4.

Modelling of glacier retreat in the Himalayas is hindered by sparse data. Field, satellite and weather records confirm that 9% of the ice area present in the early 1970s had disappeared by the early 2000s (ref. 5). But there has been no comprehensive assessment of current regional mass balance — the difference between the accumulation of ice and its loss3.

An increased seasonal melt coupled with rains will bring more intense floods, such as those in 2010 caused by excessive monsoon rains that inundated one-fifth of Pakistan's land area for five weeks, killing 2,000 people and costing tens of billions of dollars in damage and economic impact. Sea level is rising at around 3.5 millimetres per year5 and the frequency of tropical cyclones is predicted to increase as a result of global warming. Because rain, rather than snow, falls on mountains in spring, river flows will peak before the main growing season. Summers will increasingly see dry streams, withered and abandoned crops, dead fish and low groundwater levels. 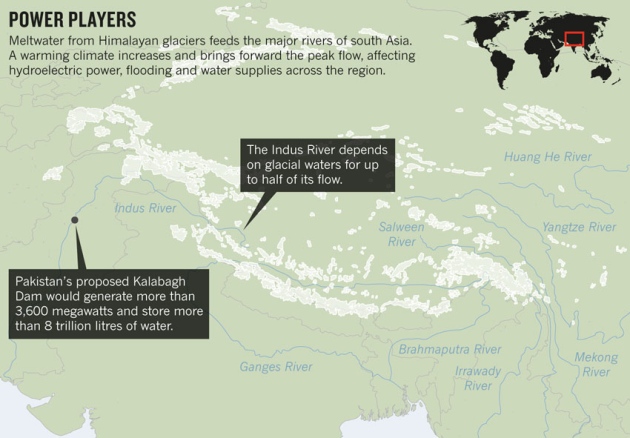 With the amount of electricity generated varying with the flow, the changing river patterns in south Asia will disrupt hydropower production. A 1% reduction in stream flow can reduce electricity output by roughly 3% (see go.nature.com/ifhoru). Generation rates will be high in the spring but lower in the summer, when energy is most needed for cooling. Greater uncertainty in the reliability of hydroelectricity will heighten disputes between the countries through which the rivers flow.

Pakistan is currently able to generate 6,700 megawatts (MW) from hydropower on Himalayan rivers, about 37% of the country's total electric-generation capacity. It has the potential to increase this to more than 25,000 MW. India has generation capacity of around 28,000 MW (14%) from hydropower from rivers fed by the Himalayan glaciers and rainwater, and has similar plans for expansion. Nepal and Bhutan currently have 600 MW and 1,500 MW capacity from hydropower, respectively, but have the potential for much more. In 2009, India and Bhutan signed a protocol in which India will develop 10,000 MW of hydroelectric-generation capacity in Bhutan by 2020 and import surplus power into India.

Hydroelectric power has its challenges: environmental impacts, ecological changes, displacement of population and the politics of the effects of dams on water storage and distribution within and between countries.

For example, the proposed construction of the Kalabagh Dam on the Indus in Pakistan's Khyber Pakhtunkhwa province, which would generate more than 3,600 MW and store more than 8 trillion litres of water, has caused concern in several provinces for more than 30 years (see 'Power players'). Downstream, the Sindh province is concerned that its share of the Indus water will be cut as water stored by the dam upstream goes to irrigate farmlands in Punjab and Khyber Pakhtunkhwa. The coastal mangrove forests of Sindh could become saline deserts without the constant flow of water from the Indus to prevent seawater from encroaching. Khyber Pakhtunkhwa's concern is that large areas of the 1,700 square kilometres of Nowshera District, with a population of more than 1.4 million, would be submerged, and a wider area would suffer from waterlogging and increasing salinity, as has occurred since the building of the Tarbela Dam in the same region.

India and Pakistan have been in dispute over India's plans to build 60 dams on the river Chenab in Jammu and Kashmir since the first, the Baglihar Dam, was completed in 2008. Pakistan is concerned that India might block off rivers feeding the Chenab — which flows through Pakistan downstream — especially in a time of war. However, India did not revoke the Indus Water Treaty, signed with Pakistan in 1960, during any of the three subsequent Indo–Pakistani wars.

As the Himalayan glaciers melt, the lack of data for predicting how river flows will change in response is of great concern. South Asian countries urgently need to initiate joint funding and strategies, in collaboration with international, environmental and development agencies, to allow research, data collection, evaluation and monitoring of glacial and climate change to take place.

Himalayan governments and scientists need a strategy for mapping and monitoring the glaciers and deriving mass changes. Academic and scientific communities need to collaborate in research across national borders, and political leaders need to include glacier melting and the future of hydroelectric power generation in their dialogues.

The regional goal should be to maintain stability of flow by taking measures to limit black-carbon emissions, control global warming, slow glacial melting and maintain hydropower generation once its peak is reached, while simultaneously pursuing other clean-energy options, such as wind and solar, for future growth.

Modelling the changing river flows caused by glacial melting and climate change, and their impact on flooding and on power generation must begin immediately so that the future of hydroelectric power in south Asia is safeguarded.