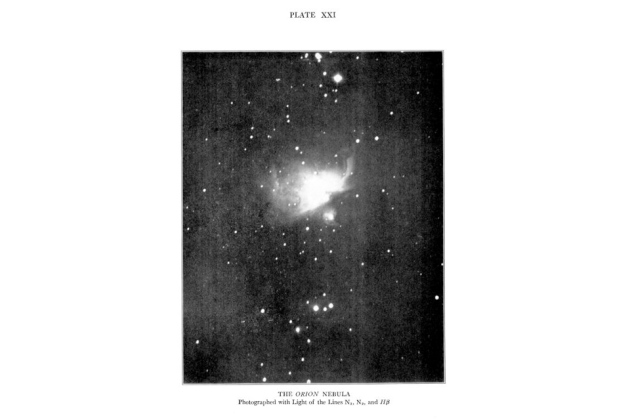 The Astonomy Rewind project aims to resurrect old astronomy figures, such as this 1905 image of the Orion Nebula.

‘Lost’ images from astronomy journals are being rediscovered through a citizen-science project that launched on 22 March — a potential boon to researchers looking for changes in the Universe. 'Astronomy Rewind' harnesses volunteers to digitize, map and make searchable observations featured in papers from journals of the American Astronomical Society (AAS) dating back to around 1850.

“Turning historical scientific literature into searchable, retrievable data is like turning the key to a treasure chest,” said Alyssa Goodman, an astronomer at the Harvard-Smithsonian Center for Astrophysics (CfA) in Cambridge, Massachusetts, announcing the project, in a statement.

Learning about time-variable celestial objects, such as stars that erupt as novae more than once or hurtle across their galaxies, requires observing them over long periods of time. But observations published in journals before roughly 1995 —  when the AAS went digital — are rarely indexed in online image databases. And few journal images, even today, are stored in a way that makes them easily searchable, says Goodman.

Power of the people

Astronomy Rewind is designed to tap into humans’ prowess, relative to computers, at recognizing astronomical images among scanned journal pages, which are a mixture of text and multiple graphics. The project is hosted on the ‘Zooniverse’ platform, a citizen-science web portal that includes more than 1 million volunteers. Contributors — five for every page to ensure reliability — identify image types and look for text that gives the orientation, scale and coordinates of each object. So far, ‘zoonizens‘ have taken to Astronomy Rewind with zeal, processing an entire batch of more than 6,500 images, which organizers had anticipated would take months, in a single day. “The Zoonizens reaction to this project has astonished us all — in a good way,” says Goodman.

“It's a great project, and essential for time-variable astronomy amongst other things,” says Tim O'Brien, an astrophysicist at the University of Manchester, UK. The images could help scientists to spot the movement of runaway stars ejected from their clusters. The project should also boost the number of known recurrent novae — white dwarfs that repeatedly shed matter in explosive bursts, and of which only ten are known in the Milky Way. The most recently discovered of these was found in 2009 by astronomers trawling through archival data, which is painstaking work, says Matt Darnley, an astrophysicist at Liverpool John Moores University, UK.

Stephan Geier, an astronomer at the University of Tübingen, Germany, says that the initiative could help astronomers to find new examples of other fleeting or fast-moving phenomena. But he is sceptical about how much can be gleaned from scanned images — for example, information on a star's brightness — without the original photographic plates.

Goodman says that the project should also provide a window into science history, by revealing which celestial objects have drawn scientists’ interest over the past 150 years, and in what ways. “Scholars will be able to investigate, over a long time baseline, how astronomers’ focus changed,” she says.