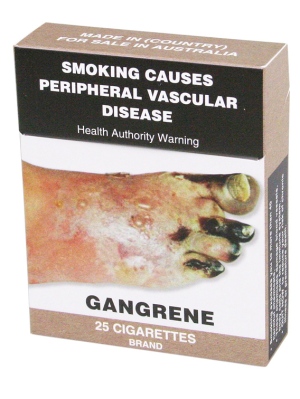 From December 2012, Australia plans to strip logos and branding from all cigarette packets.

Australian smokers are already confronted by graphic images and warnings of death and disease every time they pull out a packet of cigarettes. But from December 2012, the warnings will be bigger, more gruesome and on a monochrome paper backing. In its latest attempt to curb smoking rates, the Australian government has voted to standardize the content on cigarette packets. Nature explores the thinking behind the legislation.

Cigarette packets will be almost identical. The only variation will be the vivid image — a sickly child on a respirator, say, or a gangrenous foot — which, combined with large text health warnings, will take up over 75% of the surface of the packet. The rest of the pack will be a brown paper background. The company and cigarette brand name will be small and in a prescribed position and font.

There will be no logos, no promotional text, no glossy paper and no colour variation. “It’s difficult to overestimate how revolutionary this move is,” says Simon Chapman, a public-health scientist at the University of Sydney. He says that no other product has ever had its packaging regulated so systematically by the government.

How will this reduce smoking?

Tobacco advertising was completely outlawed in Australia by 1992, after bans on radio and television in 1976. This means that cigarette packets are one of very few ways that tobacco companies can use to entice potential customers. Australian public-health experts hope that taking away this means of promotion and making the packets highly unattractive will deter non-smokers, especially young people, from taking up the habit, and make existing smokers feel uncomfortable when they pull out a packet, prompting them to smoke less or even quit.

“None of us expects this to have a major impact on existing smokers,” says Chapman. “We expect the major impact to be a generational effect.” He says the new laws mean that the next generation will grow up without ever seeing cigarettes in a “pretty box” that can be associated with personal style or identity.

What’s the evidence that it will work?

In its Report on the Global Tobacco Epidemic, 20111, the World Health Organization provides statistics from multiple countries showing that packet warnings, particularly pictorial labels, boost the number of people who intend to quit, quit, remain abstinent and do not start smoking.

In Australia, the proportion of 12–17 year olds who smoke every day is only 2.5%. That's “the lowest it has ever been”, says Chapman, who points out that these children have never seen a cigarette advertisement in their everyday environment. The adult smoking rate is 15.1%2. These rates are lower than those in the United States and Europe.

The chief executive of the non-governmental cancer-control organization Cancer Council Australia, Ian Olver, says that the fact that the tobacco industry is vehemently opposed to the legislation is a good indication that the industry's market research has also shown that plain packaging will reduce its customer base.

What about the economics of the plan?

Smoking-related diseases kill around 15,000 Australians a year, and a 2009 report3 by the Western Australian Cancer Council estimated that tobacco use cost Australia more than $31 billion in 2004–05. This greatly outweighs the $5.6 billion or so the country receives in annual tax revenue from tobacco sales. The predicted health and economic benefits of plain packaging have garnered all-party support for the plan in the Australian parliament, although this took more than two years of debate in the face of strong resistance from tobacco companies and retail associations.

What do the tobacco companies say?

The brown paper packets are far from their favourite thing. They claim that the government’s proposed control over their trademarks amounts to an unlawful acquisition of their property without compensation, and they are vowing to challenge the decision in the Australian high court. Australian health minister Nicola Roxon has repeatedly said that the government will go ahead with the plan despite the threats. “We're ready for that if they take legal action. We hope that they don't”, she said when the Senate passed the bill on 10 November.

Cigarette-packaging regulations vary widely around the world. Graphic images have been mandatory in Australia since 2006, and in the United Kingdom since 2008. Packs in the United States must carry written warnings. The US Food and Drug Administration had planned to mandate graphic health warnings on packets from September 2012, but cigarette companies mounted a legal challenge, and on 7 November a US district judge blocked the requirement until the lawsuit is decided.

Australia will be the first country to roll out plain packaging, so health agencies and governments will be watching closely to see whether it has significant public-health effects, and what political and legal battles ensue.