Haizi mountain, near Daocheng in the Sichuan province of China, will host an observatory designed to detect ultra-high-energy γ-rays.

Set high on a mountain plain in China, an ambitious observatory will offer a unique perspective on the origins of cosmic rays, high-energy particles that rain down on Earth. Construction has started on the project, which will probe, for the first time, ultra-high-energy γ-rays — bursts of radiation thought to be produced alongside cosmic rays in our Galaxy, but whose origins are easier to track.

The 1.3-square-kilometre site near Daocheng in Sichuan, close to Tibet, received the go-ahead in January, after an environmental report convinced the government that construction would not harm the threatened white-lipped deer (Cervus albirostris) and other animals in a nearby nature reserve. Now, contractors are installing infrastructure for the 1.2-billion-yuan (US$174-million) Large High Altitude Air Shower Observatory (LHAASO).

“This will be the leading project to clarify questions of cosmic-ray physics,” says Giuseppe Di Sciascio, a particle physicist at the National Institute for Nuclear Physics (INFN) in Rome. Di Sciascio, along with researchers from a number of countries, including Switzerland, Russia and Thailand, hopes to collaborate on the project. Chief among the physics questions that LHAASO will investigate is what accelerates cosmic rays — charged particles such as protons or atomic nuclei — to such high energies. Some cosmic rays that hit Earth have energies millions of times greater than the energies produced by the most powerful human-made particle accelerator, the Large Hadron Collider near Geneva, Switzerland. Scientists have proposed certain celestial phenomena, such as black holes or supernovae, as origins, but no one has confirmed this conclusively.

Magnetic forces can alter the direction of charged particles as they pass through space, which makes their paths untraceable. But γ-rays — which have no charge — shoot straight. Scientists suspect that some of the mechanisms that emit high-energy γ-rays might also be the ones that launch cosmic rays; hence, they hope to track back the path of falling γ-rays to pinpoint a cosmic-ray producer. “γ-rays can point straight back to the source,” says Cao Zhen, project director for LHAASO and an astroparticle physicist at the Institute of High Energy Physics in Beijing. 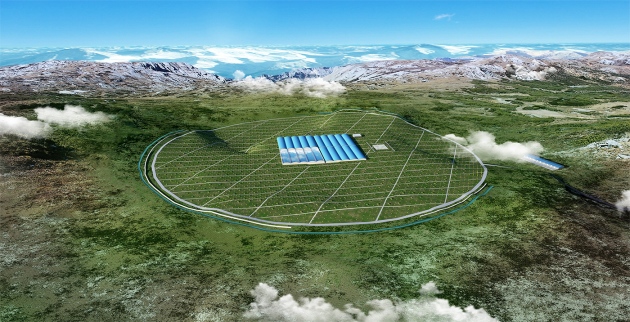 Around 180 sources of high-energy γ-rays have been identified, but none has been confirmed to also produce cosmic rays. But LHAASO will be the first to hunt for the highest-energy γ-rays — those in the peta-electronvolt (1015 eV) range. “LHAASO will open a new window into the γ-ray sky as the first observatory in this range,” says Avi Loeb, a theoretical astrophysicist at Harvard University in Cambridge, Massachusetts.

Cao says that one-quarter of each of the arrays will be installed in 2018, and he expects to obtain first results — likely to be an analysis of the Crab Nebula — in 2019. The observatory is set for completion in January 2021.

LHAASO’s dense configuration of detector arrays and its location give it an unprecedented ability to spot ultra-high-energy γ-rays, says Di Sciascio. Earth’s upper atmosphere absorbs these rays, which splinter into ‘air showers’ of lower-energy particles. Because LHAASO is more than 4.4 kilometres above ground, its detectors will be able to capture much of the shower before it decays to much lower energies.

The observatory has more than 5,000 ‘scintillator’ detectors (see ‘Catching rays’), which convert γ-radiation into light that can be measured to identify the original energies of the incoming particles. 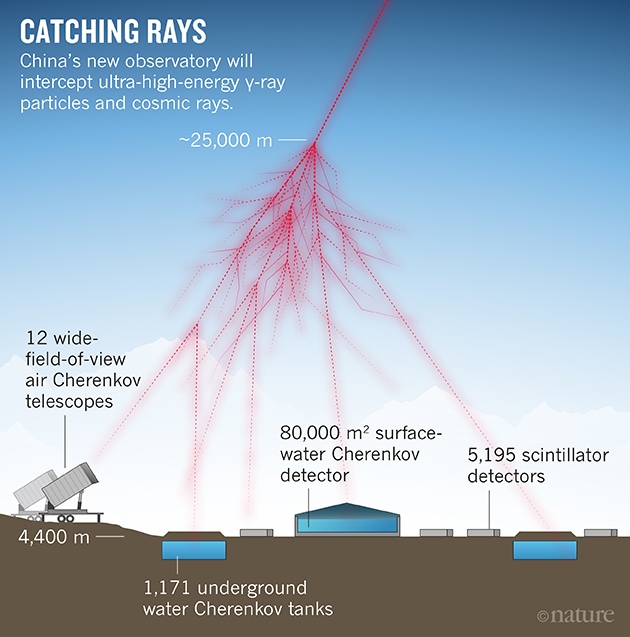 LHAASO will also include 80,000 square metres of surface water pools to take advantage of the Cherenkov effect — in which particles travelling faster than the speed of light in a particular medium emit light. This phenomenon occurs when particles from γ-ray showers travel through air or water. The surface pools will be equipped with photo-multiplier tubes to detect the bluish light, and scientists can use these data to calculate a particle’s energy and direction. By combing data from different particles, they try to recreate the original γ-ray.

LHAASO’s surface water array is four times larger than the High Altitude Water Cherenkov (HAWC) γ-ray Observatory’s detector pool in the Pico de Orizaba National Park in Mexico, which has identified dozens of γ-ray sources since 2015. Cao hesitates to put numbers on what LHAASO might detect, but says that scientists expect it to bring the number of known γ-ray sources into the thousand range.

Another kind of detector will also help LHAASO to spot γ-rays in the peta-electronvolt range: 1,171 underground water tanks that will pick out muons, which, unlike other particles, can penetrate into Earth. Gamma-ray showers contain fewer muons than cosmic-ray showers, which helps researchers to pick out γ-ray events. “If we see lots of muons, we know it’s background — a cosmic-ray shower — and we reject it,” says Cao.

LHAASO will also search for cosmic-ray showers directly, and has dedicated 12 telescopes to the task. They will harness the Cherenkov effect to enable scientists to calculate the energy and composition of cosmic rays.

Di Sciascio says that LHAASO could establish the maximum energies that cosmic events in the Milky Way can produce, because its detection capabilities reach the highest energy ranges thought to be emitted by such events. He hopes that LHAASO will settle an ongoing debate over these energy limits. LHAASO’s layout and its wide variety of detectors “make us confident that all these questions will be faced with unprecedented sensitivity”, he says.

An earlier version of the graphic in this story gave the wrong surface area for the surface-water Cherenkov detector.