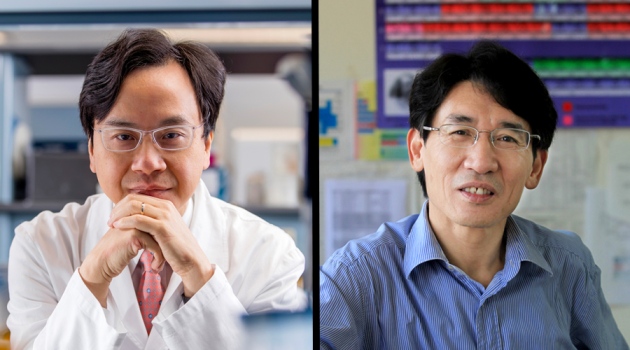 The first winners of a prize devoted exclusively to scientific discoveries made in China were announced on 19 September in Beijing.

The Future Forum, a non-profit organization established last year in Beijing, announced that pathologist Yuk Ming Dennis Lo at the Chinese University of Hong Kong has won the life-science Future Science Prize for the discovery that DNA from a fetus can be extracted from the mother’s blood1. The discovery led to the now widely used non-invasive tests to screen a pregnant woman’s blood to see if the fetus has disorders such as Down’s syndrome. Shenzhen-based BGI alone has carried out more than 1 million screens based on the finding.

Qi-Kun Xue of Tsinghua University in Beijing netted the physics prize for the experimental discovery of high-temperature superconductivity at the interfaces of materials2 and the quantized anomalous Hall effect3 — an unusual orderly motion of electrons in a conductor at low temperature. That line of work belongs in the fast-emerging field of topological insulators. Each prize is worth US$1 million.

Xue says that he will “share the money with my colleagues who made significant contribution to the two discoveries”. Lo says he hasn't had time to think about what to do with the money, but that he will start by using some of it to invite family, friends and long-time collaborators to the prize ceremony in January in Beijing. “Everything happened so rapidly today,” says Lo. The prizes were announced at 3 p.m. local time at a press conference.

Organizers stress that the prize, funded by Robin Li, chief executive of China’s giant Internet search engine, Baidu, and several other private industry executives, is awarded on the basis of “fair and independent” selection. Government-sponsored awards and grants have spurred controversy with charges of favouritism and poor stewardship in the past.

Chinese media have billed the awards as “China’s Nobel Prize”. Winners of the annual prize are selected by a Chinese jury, and given only to scientists working in mainland China, Hong Kong, Macau and Taiwan. The fields can change each year. Up to five scientists can share a prize.

Lo says that the high-profile prizes could bring stories of discoveries to a new generation of Chinese students. “Stories of scientific discoveries are a powerful tool for arousing students’ interests in science,” he says. He notes that the discovery of DNA by Watson and Crick motivated him when he was young.

Last year, China celebrated the first scientific Nobel Prize awarded for work done in the country. That prize was awarded to Youyou Tu, a pharmacologist at the China Academy of Chinese Medical Sciences in Beijing, for research she had done more than four decades ago. It triggered debate over why there haven’t been more Chinese laureates, and whether the current science funding system in China encourages the type of creativity needed to win such prizes.

Lo recognizes that the ‘Chinese Nobel’ is like a “young plant with just the first year of blossom” compared with the real Nobel prize, which has more than a century of achievements. “I am hopeful that, with time, [the Future Science prize] would acquire the status and history enjoyed by its more established counterparts,” he says.

Other science prizes from the Chinese region that draw comparisons with the Nobel prize, such as Taiwan’s Tang Prize and Hong Kong’s Shaw prize, can be awarded for work done anywhere in the world.