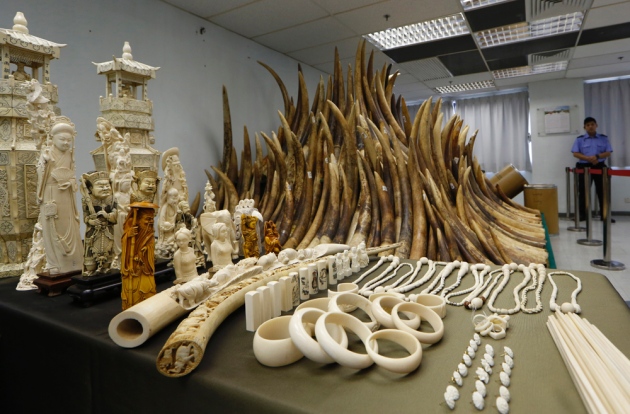 Criminal gangs tried to smuggle this ivory into China from Tanzania.

The fight against the illegal ivory trade had some success last month with the arrest of a Chinese woman alleged to have smuggled more than 700 elephant tusks from Tanzania. Ivory is a particular prize in China, where it has been carved into ornaments, chopsticks and jewellery for more than 3,000 years.

This event, and many similar ones, puts the Chinese government in an awkward position. Officially, China has pledged to help to prevent the illegal killing of elephants, and has taken steps to stop the import of illegal ivory. Yet in 2006, the Chinese Ministry of Culture designated ivory carving a national intangible cultural heritage. As such, the government has continued to support the domestic sale and use of ‘legal’ ivory — and occasionally buys global stockpiles of confiscated ivory to sell on to its carvers. There are 34 officially designated ivory manufacturers in China and 130 licensed dealers who sell tonnes of legal ivory items to shoppers each year.

The Chinese government has argued that there are enough elephants in Africa to support regular — and legal — sustainable trade to meet demand, and that its domestic market therefore does not lead to increased poaching. It introduced regulations requiring each ivory product to be registered and sold with a certificate showing that it is from an approved source. Buoyed by official support, the ivory industry promotes its products to the public as a wise financial investment. In 2009, after a controversial approval process by CITES, the Convention on International Trade in Endangered Species of Wild Fauna and Flora, China bought and imported 62 tonnes of ivory from countries across southern Africa.

“The cultural significance and value of ivory go back centuries.”

The problem with this approach is that the legal market encourages poaching and the continued introduction of illegal ivory into the market. Surveys in China suggest that one-third of the licensed stores still sell illegal ivory, and that dozens of unlicensed dealers continue to operate.

Recorded animal deaths and seizures of illegal ivory confirm the scale of the continuing black market. Tens of thousands of elephants are poached each year, and much of the resulting ivory is smuggled to China and southeast Asia. More than half a tonne of seized ivory was crushed in Beijing in May, and more than six tonnes were destroyed in Guangdong in January last year.

When the ivory was crushed in May, the Chinese government said that it wanted to do more to protect the elephants, and pledged to phase out its domestic — legal — ivory trade. Last month, on a visit to the United States, China’s President Xi Jinping went further and agreed a deal to take “significant and timely” steps to close down this domestic market. Popular opinion in China seems to support such a total ban on ivory sales, but the large stockpiles — Chinese firms are reckoned to be sitting on 40 tonnes of legal raw ivory and unfinished products since the 2009 deal — must be dealt with somehow.

Chinese law, which aims to protect the newly established market economy, does not allow registered manufacturers and suppliers to be simply closed down. Instead, ivory must be decommercialized.

The simplest way to do this, and one that the government should consider, is to buy back all legally held commercial ivory stock in a compulsory-purchase scheme. The government should then pass these stockpiles to museums as appropriate. After such a move, no trade in ivory would be allowed; any ivory product on the market would be illegal. This would make enforcement simpler, cheaper and more effective. Ivory sculptures could still be displayed in museums as national treasures, and used in schools to educate children about Chinese heritage and also about the need for conservation. 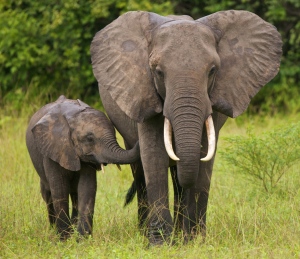 How much would such a step cost? In 2009, the purchase price for the legal ivory stock was US$1,350 per kilogram. Given the cost of storage and management since then, a fair price now would be about $2,100 per kilogram. As such, it would cost about $84 million to buy back the raw ivory. Current market prices would add about another $500 million for purchasing the worked products.

The overall cost looks high, but China regularly spends billions of dollars on what it calls ecological compensation. Farmers and landowners are paid to convert marginal cropland to forest or grassland (the ‘grain for green’ scheme), and local governments are given funds for conservation and ecosystem management. Some estimates suggest that China has spent $100 billion on such projects, so the $600 million or so needed to eliminate the demand for ivory represents a small percentage of the overall effort. There are ways to reduce the cost if necessary. Some of the money could be used to retrain the state-owned ivory-carving manufacturers to produce alternative goods.

Under the terms of last month’s presidential agreement, the United States (the second-biggest market for illegal ivory after China) said that it would tighten its own restrictions on the import of elephant products, including hunting trophies. The cultural significance and value of ivory go back centuries. As Joseph Conrad wrote in Heart of Darkness: “The word ‘ivory’ rang in the air, was whispered, was sighed. You would think they were praying to it.” It will not be easy to separate this cultural value from a monetary value. But to save the elephant, we must try.