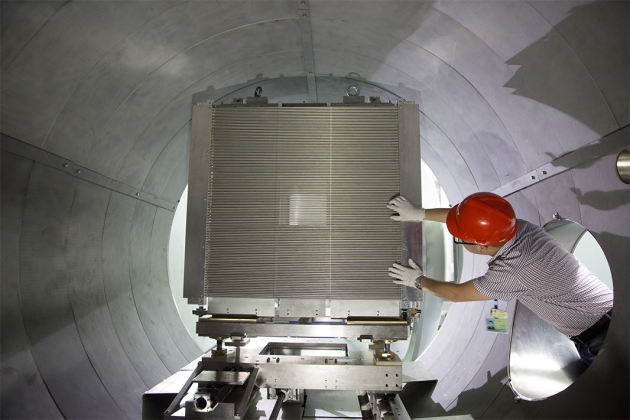 Engineers work on an instrument at the China Spallation Neutron Source in Dongguan.

China is revving up its next-generation neutron generator and will soon start experiments there. That will lift the country into a select group of nations with facilities that produce intense neutron beams to study the structure of materials.

The China Spallation Neutron Source (CSNS) in Dongguan, a 2.2-billion-yuan (US$331-million) centre, will allow the country’s growing pool of top-notch physicists and material scientists, along with international collaborators, to compete in multiple physics and engineering fields. Its designers also hope that the facility will lead to commercial products and applications ranging from batteries and bridges to aeroplane engines and cancer therapy.

“It is not only a big step forward for Chinese scientists, but also a significant event for the international scientist community,” says Wang Xun-Li, a physicist at the City University of Hong Kong who has been involved in planning the facility.

Spallation neutron sources produce neutrons by slamming protons onto a metal target — CSNS uses tungsten. They are more cost effective and safer than other methods, which use nuclear reactors to produce neutron beams. As neutrons have no charge, they can penetrate materials more easily than some other probing methods, and they are more sensitive to light elements such as hydrogen, making them useful for evaluating candidate materials for fuel cells. Similar facilities exist only in the United Kingdom, United States, Japan and Switzerland, and one is under construction in Sweden.

Fujio Maekawa, a specialist in neutron sources at the Japan Proton Accelerator Research Complex in Tokaimura, says that although the CSNS delivers neutrons at a lower density than other spallation sources — which means that experiments will take longer — a planned upgrade will bring it in line with other facilities. And given their scarcity, “neutron users around the world always welcome new sources”, he says.

The CSNS will have capacity to host 20 beam lines, supplying as many instruments. Preliminary tests of its first three instruments began on 1 November. “Neutrons arrived at the samples as expected,” says Wang Fangwei, head of the neutron-science division at CSNS. Although debugging might take a couple of years, he expects the instruments to be calibrated and ready for initial experiments by the end of 2017.

Chinese physicists are eager to use the facility to analyse the underlying magnetic properties of materials, an area in which the country has significant experience. Wang Xun-Li says that several planned instruments will give scientists the chance to move to the forefront of fields such as the physics of skyrmions — vortex-like excitations in magnetic materials — and high-temperature superconductivity. “There are a whole bunch of early- to mid-career scientists who are hungry to use the facility for studying magnetism,” says Wang Xun-Li.

Wang Xun-Li thinks that the latest facility will encourage Chinese researchers to remain in the country instead of pursuing careers elsewhere. “In the past, it was common to see Chinese scientists go abroad for these kinds of studies,” he says.

The facility’s first instruments are also attracting international researchers. German material scientist Frank Klose says that the CSNS was a major factor when he and material scientist Christine Rehm, his wife, decided to join the new Guangdong Technion Israel Institute of Technology in Shantou, 400 kilometres east of Dongguan. Klose’s research focuses on designing data-storage devices and sensors that could be used in hydrogen-powered cars. He helped design one of the facility's instruments to investigate the magnetic properties of spintronic devices, which take advantage of the spin of electrons to store data.

But scientists contacted by Nature have raised concerns about CSNS’s location, saying that Dongguan lacks services and infrastructure, such as schools and universities, that will persuade top scientists and their families to move there. “I believe CSNS is suffering from a lack of first-grade scientists who actually are based in Dongguan,” says a researcher familiar with the facility, who asked for anonymity because of the sensitivity of the issue. Potential users have also expressed some frustration that only 3 instruments will be ready this year, despite the facility’s capacity to host 20.

But more instruments are already being built. Shenzhen's government is funding two that are expected to be ready by the end of 2019, including one designed to model high-pressure environments, such as the Earth's core. Mao Ho-Kwang, a geophysicist at the Carnegie Institution for Science in Washington DC, is keen to use it to simulate what happens to materials in high-pressure conditions. “The CSNS instruments will be a great asset for Earth, environmental and energy science, as well as physics, chemistry and material science,” says Mao. “I am very excited, and the whole neutron community is getting very excited too”.