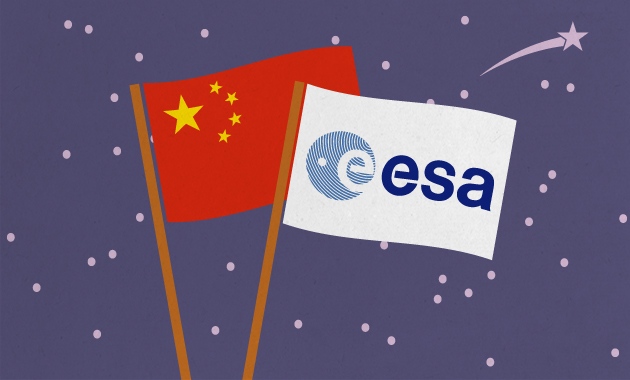 China and the European Space Agency are collaborating to launch a low-cost space mission.

An array of satellites around the Moon is in the running to become the first mission in a collaboration between Europe and China — a telescope to peer back to the Universe’s ‘Dark Ages’, the time before the first stars were formed.

The proposed project, called Discovering the Sky at the Longest Wavelengths (DSL), is one of around 15 submitted for a call by the European Space Agency (ESA) and the Chinese Academy of Sciences (CAS) that closed on 16 March. The final mission will be led by principal investigators affiliated with both European and Chinese institutions, with an aim to launch in 2021.

This will not be the first mission that China and ESA have worked on together, says Luigi Colangeli, who heads the coordination office for ESA’s scientific programme. European scientists contributed to the payload of China’s Double Star mission, which launched in 2003 to study the near-Earth environment. But it will be the first jointly-run project set up in collaboration from the start, he says.

“A Chinese–American mission would have been impossible.”

The DSL project would use the satellite array to detect radio signals with wavelengths a few hundred metres in length . When passing around the Moon’s dark side, the telescope would be free of interference from Earth’s ionosphere or artificial radio sources, and might be able to spot signatures of hydrogen thought to have existed from 370,000 years to 550 million years after the Big Bang.

Other proposals include an X-ray imager called SMILE that would study Earth's magnetosphere, and SIRIUS, an extreme-ultraviolet telescope that would look at ‘hot objects’, such as stellar coronae, in the Galaxy.

The call is ESA's first step on the path to more collaboration with China, says Fabio Favata, head of science planning and community coordination at ESA. Whether a bigger joint project follows will depend on how this one fares.

Although proposals can cover any scientific area — bar exploration of the Moon or Mars, which are covered by separate programmes at both agencies — the mission’s scope is limited by its funding. ESA will contribute just more than €50 million (US$53 million) to the project, which China is expected to match.

The call is a “win–win” situation for China and Europe, says Taotao Fang, an astronomer at Xiamen University in China, who is part of the team that proposed the MESSIER orbiter, a telescope studying galaxy formation.

China’s biggest gain will be learning from ESA’s experience in purely scientific missions, which have been rare in China’s space programme, says Linjie Chen, a member of the DSL team and an astrophysicist at the Chinese National Astronomical Observatories in Beijing.

ESA can gain from collaborating with a country with a healthy space programme backed by growing investment, adds Chen. In 2013, China became the first country since the 1970s to put a lander on the Moon. The country is planning a lunar sample-return mission in 2017 and aims to build a space station by 2020. China is also planning to launch four space-science missions, starting with the Dark Matter Particle Explorer (DAMPE) in November.

Collaborations with China face an extra challenge, Favata says. Strict export controls in US law forbid the use of some US-made components in Chinese missions. But at least collaboration is possible, says Heino Falcke, an astrophysicist at Radboud University in Nijmegen, the Netherlands, and principal investigator for the DSL mission. “A Chinese–American mission would have been impossible,” he says.

The proposed missions will now be assessed for their technological feasibility and scientific merit. By the end of this year, the pool will be narrowed down to a winner or a handful of contenders, which will enter a study phase of around two years, with a final go-ahead expected in 2017.