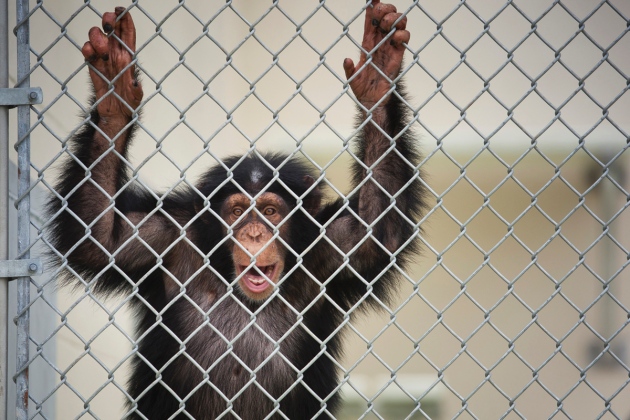 Tightened standards could pose a barrier to all but a few studies making use of research chimps.

A landmark report published by the Institute of Medicine (IOM) last week has triggered the US government to reconsider what, if any, chimpanzee research should receive funding. It has also left Christopher Walker pondering the implications for an enterprise close to his heart — developing a preventive vaccine against the hepatitis C virus (HCV).

Walker, director of the Nationwide Children’s Hospital’s Center for Vaccines and Immunity in Columbus, Ohio, found himself agreeing with many of the recommendations in the report, which was released on 15 December. They include strict criteria for assessing when chimps can be used in research projects (see ‘ Raising the bar for chimp research’), and the establishment of an expert committee to judge proposed studies on a case-by-case basis.

Walker even agreed that no chimp experiment aimed at developing therapies for the 170 million people worldwide infected with HCV would meet those criteria. For example, although the chimp is the only other animal susceptible to HCV infection, new in vitro culture systems and small-animal models containing human cells offer alternatives.

What gave Walker pause was an issue that split the otherwise-unanimous IOM authors. Only half felt that chimpanzees may be necessary to identify HCV vaccine candidates for use in humans. The split makes it hard to predict whether government-funded HCV vaccine researchers will still be approved to work with chimps. “If you have an idea for an entirely new approach to vaccination, but can’t get proof of that principle in animals, my fear is that it will never move ahead into human trials,” says Walker, who is studying protective immunity to HCV in chimps.

Although the IOM report leaves the door partly open for HCV vaccine research, in other disease areas it is less equivocal. Jeffrey Kahn, the committee chair and deputy director of policy and administration at Johns Hopkins University’s Berman Institute of Bioethics in Baltimore, Maryland, notes that only one other active research area meets the IOM standards: existing studies in which chimps are used to produce monoclonal antibodies and to test their safety. “No other current biomedical research areas were seen as meeting the committee’s criteria,” Kahn says.

During a media briefing after the report’s release, Francis Collins, the director of the National Institutes of Health (NIH) in Bethesda, Maryland, which supports 612 chimps and oversees most of the government’s chimp research, said that 37 agency-funded chimp studies would be evaluated under the report’s criteria. Those that do not pass muster will be phased out; no new studies involving experimentation on chimps will be funded unless the criteria are met.

The committee’s split over the use of chimps to identify promising HCV vaccine candidates reveals a fault line within the biomedical community. In a letter sent to the committee on 25 September, 100 scientists, including several Nobel laureates, argued that, without access to the chimp, there will be a “substantial delay” in creating an effective vaccine, and that there is no guarantee that promising-looking alternatives, such as mouse models, will prove to be effective.

Yet the report’s conclusions reflect the tenor of the times, as well as the progress of alternatives to animal research. Public opposition to the use of chimps in research has grown steadily. This is reflected in proposed legislation on Capitol Hill that would ban invasive and comparative-genomic chimp research, and in a petition from animal-welfare groups being considered by the US Fish and Wildlife Service to declare research chimps as endangered, which would effectively end any chimp research not aimed at conservation.

The IOM report was requested by the NIH after high-profile politicians and activists protested against the agency’s plan to move 186 semi-retired chimps back into active research (Nature 467, 507–508; 2010). The committee wrote that its deliberations, although formally considering only scientific necessity, were “suffused with an awareness of the moral cost of such research”.

Researchers are divided over the number of experiments that stand to be affected. Collins guesses that “something like 50%” of the 37 NIH-funded experiments would be curtailed, but the directors of the three NIH-supported research centres that conduct invasive experiments say that they carried out only seven such experiments with NIH funded chimps this year.

The paucity of invasive experiments, they say, shows that chimps are already being used highly selectively. “There are some assumptions, it seems, that the IOM criteria were not being applied already. And I think that’s incorrect,” says Thomas Rowell, director of the New Iberia Research Center in Louisiana, the largest US chimp research centre.

Two of four projects using chimps at the Michale E. Keeling Center for Comparative Medicine and Research near Bastrop, Texas, this year involved testing treatments on chimps chronically infected with hepatitis C. A third studied hepatitis-C infectivity and the fourth involved HIV/AIDS. All four are either complete or near completion, so are unlikely to be affected by the new recommendations.

John VandeBerg, director of the Southwest National Primate Research Center in San Antonio, Texas, says that there are two NIH-funded studies under way there. “It is my judgement that both of these studies would qualify for continuation” under the IOM criteria, he says.

But animal-welfare activists are pleased that the committee came down resoundingly on the side of less is better. Even in the case of a preventive HCV vaccine, says Kathleen Conlee, senior director for animal-research issues at the Humane Society of the United States in Washington DC, “it didn’t say, ‘We absolutely need chimps for this’, but rather, ‘We couldn’t decide’”.

Supporters of chimp research take heart from a separate IOM observation that a new or re-emergent disease could require the use of chimps in the future. “The IOM report is the first authoritative document to acknowledge the very real possibility that new and emerging threats to human health may require access to chimps,” says Christian Abee, director of the Keeling Center. “A plan will have to be developed to ensure that chimps are available in the future.”

When asked whether the new report will require a reassessment of the chimp-breeding ban that the NIH put in place in 1995, Collins says that he does not have an analysis showing how many chimps should “be kept on hand should the need arise from some sort of new pandemic for their use”. But, he says, “with more than 600 chimps already available and owned by the NIH, it seems as though we have a pretty substantial population to work with”.