In 2004, Cassini became the first spacecraft to orbit Saturn.

Twenty years ago, in the wee hours of a muggy Florida morning, the Cassini spacecraft lit up the skies as it blasted off from Cape Canaveral. Now, after a 3.5-billion-kilometre journey and 13 years spent circling Saturn, the orbiter is running low on fuel. On 15 September, Cassini's controllers on Earth will send the craft plunging into Saturn's cloudtops to prevent it from accidentally crashing into and contaminating any moon that might be able to harbour life.

Cassini will send data back to Earth right up until that incandescent coda — a fitting end for one of history's most successful interplanetary missions. A joint venture between NASA, the European Space Agency and the Italian Space Agency, Cassini was the first spacecraft to orbit Saturn. And with much more time to gather science than the earlier fly-bys of Pioneer 11 in 1979, Voyager 1 in 1980 and Voyager 2 in 1981, the mission delivered discoveries in spades, racking up an impressive list of findings as it looped around the majestic planet, danced along its glorious rings and whizzed past many of its bizarre moons. “Cassini was a long wait, but it was definitely worth it,” says Linda Spilker, a planetary scientist at NASA's Jet Propulsion Laboratory in Pasadena, California, and the mission's project scientist. “It has so many incredible accomplishments we can be so proud of.” 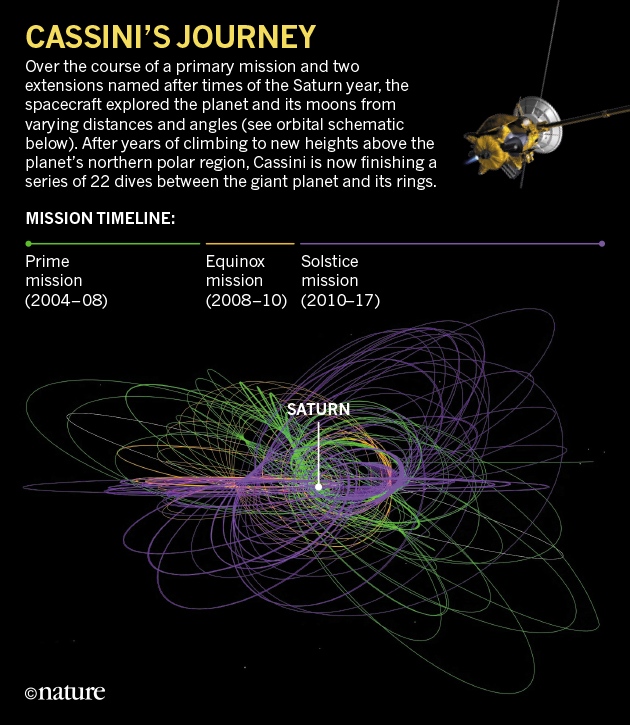 The spacecraft revealed the chaotic dynamics that shape Saturn's rings, found geysers spraying from the moon Enceladus and watched gigantic storms roil the planet's atmosphere. It observed seasons change for nearly half of a Saturn year, as first the equinox and then the solstice passed, transforming weather patterns. Over the life of Cassini's mission, Saturn has become less of a stranger and revealed itself to be a vibrant system churning with continual change. The spacecraft's observations became a touchstone for understanding the complexity of gas-giant planets, a legacy that NASA's Juno spacecraft is currently continuing at Jupiter. 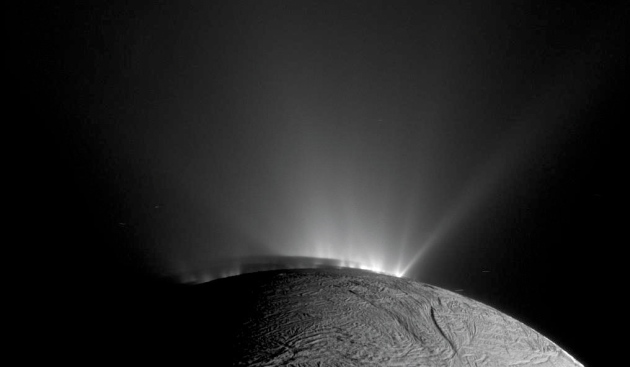 Cassini also made history when it released the Huygens probe, which became the first craft to touch down in the outer Solar System. After a daring two-and-a-half hour descent to the surface of the moon Titan in 2005, Huygens sent back snapshots of a frozen floodplain littered with rocks. Cassini's mapping later revealed Titan to be a world teeming with hydrocarbon lakes and rivers, replenished by methane and ethane rain. 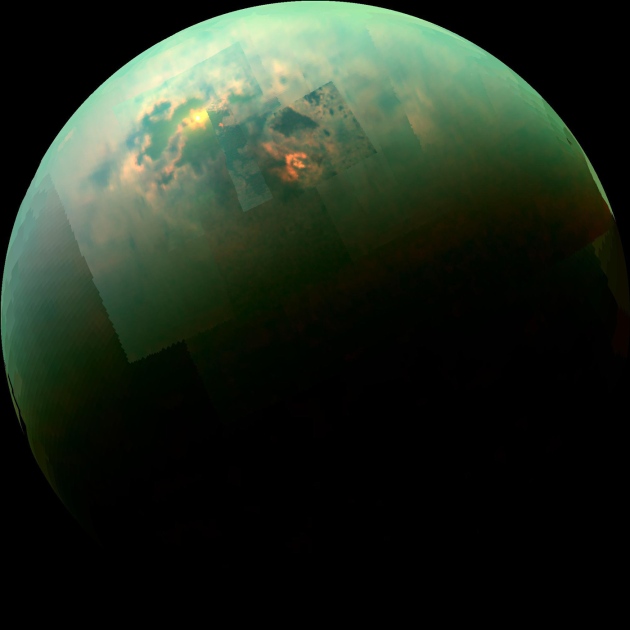 Sunlight glints off lakes of liquid hydrocarbons on Titan.

With no official plans to return to Saturn anytime soon, 15 September will mark the end of an era. “On Cassini's final day, we will be watching the signal as we go as deeply into the atmosphere as we can,” says Spilker. “That day to say goodbye will be a tough day.”

A menagerie of moons

Cassini's biggest surprises came as it studied some of Saturn's 60-plus moons, raising as many questions as it answered.

Three of Saturn’s moons — Epimetheus, Janus and larger Dione — pass by one another in this set of images captured in 2005.

Researchers finally solved the mystery of Iapetus — which boasts one light-coloured side and one dark side — when they discovered an enormous ring of material streaming off another of Saturn's moons, Phoebe. Iapetus seems to get its two-faced look as its leading surface ploughs through Phoebe's debris. And in their study of how crater-pocked Mimas wobbles on its axis, Cassini scientists realized that the world may have either a buried ocean or a stretched-out core.

Saturn’s moons come in a variety of shapes.

A look at the planet's littlest moons — never before seen up close — uncovered a panoply of strange shapes. Hyperion resembles a sponge, and Pan has been compared to a piece of space ravioli. Pandora features an enormous impact crater, a scar from some long-ago collision.

On Titan's hazy surface, cobbles of ice as hard as rock punctuate this alien landscape.

But the most astonishing observations were of Titan and Enceladus. On Titan, Saturn's largest moon, Cassini discovered a world with complex chemistry similar to Earth's before life arose. In the 72 minutes that Huygens survived on Titan's surface, the battery-powered lander snapped images of a landscape strewn with frozen rocks and cloaked in an orange haze. From above, Cassini mapped the moon using radar and other instruments, revealing enormous dunes of water ice coated with a hydrocarbon glaze, which wind for hundreds of kilometres in wavy bands near the equator. Liquid methane and ethane rain down, forming rivers and lakes of hydrocarbons. Cassini captured images of sunlight reflecting off these bodies of liquid — and even used radar to chart their bottoms, sketching out the depths through which a future mission's submersible might glide.

Even after all that, Enceladus stole the show. Thought to be inert before Cassini arrived, the moon actually spews ice and water vapour from enormous fractures that decorate its south-pole region like tiger stripes. Powered by Saturn's gravitational pull, the geysers spurt out 200 kilograms of salty, organic-laced material every second.

Cassini scientists were surprised to find that this material contains small particles of silica, which may be formed by the interaction of water and rock at hydrothermal vents deep inside Enceladus. On Earth, similar deep-ocean vents are home to microbes that thrive off chemical energy, far from sunlight — and so Enceladus has vaulted to the top of the list of places to search for extraterrestrial microbes. Planetary scientists are already plotting return missions to fly through Enceladus's plumes and sniff for hints of life.

Saturn's rings — the planet's most iconic feature — are populated by billions of icy particles. From afar, the rings appear fixed and perfectly sculpted, but Cassini revealed some of the processes that shape them, and showed how dynamic they truly are. Ring features form, change shape and vanish — sometimes in a matter of hours. 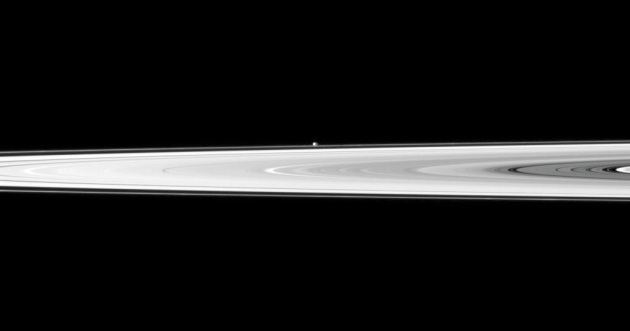 Just 100 metres or so thick, Saturn’s rings are shaped by many moons and moonlets embedded within. In this view, the moon Pandora can be seen beyond the planet’s main rings.

Cassini discovered how the gravitational forces of even the smallest of Saturn's moons can help to shepherd ring particles into beautifully manicured bands. For example, little Pan, just 28 kilometres across, has cleared a wide path through the rings. Dark and bright bands in the rings on either side of this gap reflect the pull of Pan's gravity. Images taken over the years revealed how some of Saturn's moons continuously shape and sculpt its rings — a phenomenon that was not fully apparent until Cassini was able to watch them over time. 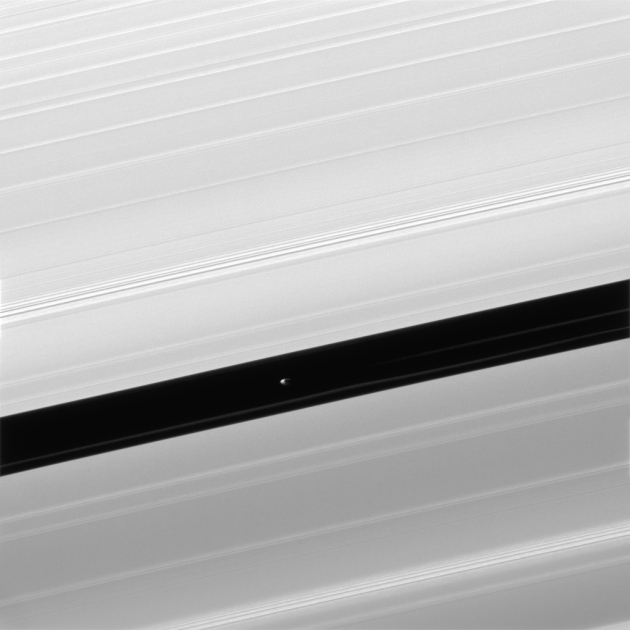 The moon Pan clears a pathway within the rings known as the Encke Gap.

But the moons are not perfect shepherds. In Saturn's F ring, a narrow band along the outside edge of the main rings, Cassini found ephemeral sprays of material called mini-jets (image, below). The gravitational pull of the nearby moon Prometheus probably causes ice particles in the ring to clump together like snowballs. 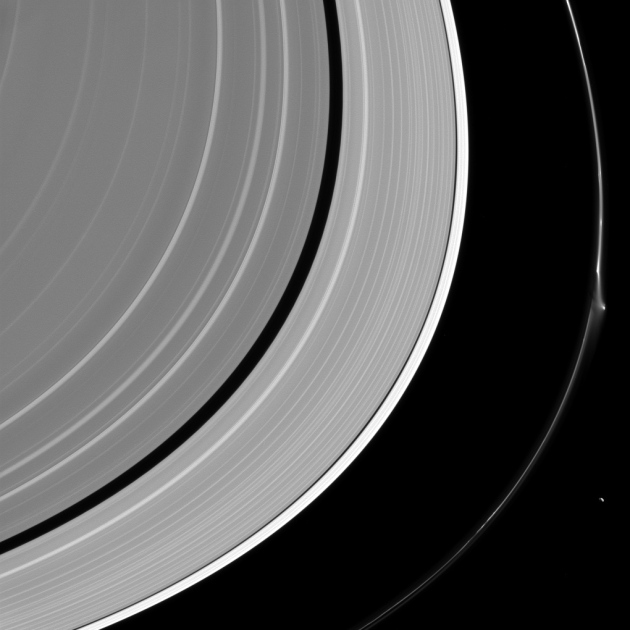 At Saturn’s F ring, gravitational disturbances have caused ring particles to clump together and kick out a dusty-looking ‘jet’ of material.

Those bigger objects then punch outwards, trailing particles behind them like a dusty veil that can stretch up to 180 kilometres long, marring the otherwise perfect rings. Out here on the fringes of the ring system, features such as these come and go.

Dramatic changes can also play out on large scales. Around the Saturnian equinox, as sunlight fell at a steep slant across the rings, Cassini observed spoke-like features that rotate with the rings much like the pattern in a bicycle wheel. These spokes, which may be huge stripes of electrostatically charged particles drifting just above and below the rings, can form and disappear over the course of a few hours.

Spoke-like features that seem to be made of charged particles rotate around the planet.

Depths of the atmosphere

With Saturn's gorgeous ring system distracting the eye, the planet's swirling cloudtop patterns are sometimes underappreciated. Cassini changed that by observing how storms roiled Saturn's atmosphere over the course of many Earth years, providing deep insights into the currents that shape the planet's atmosphere.

In late 2010, the spacecraft had a front-row seat as a thunderstorm developed into an enormous, swirling white cloud more than 10,000 kilometres across. The storm churned from deep inside the atmosphere all the way to the its upper layers, and in the ensuing months, wrapped entirely around the northern hemisphere until the 'head' of the storm crashed into the tail. Similar storms appear every two to three decades, a rate that is probably controlled by the amount of water vapour in the atmosphere. Other planets in the Solar System, such as Jupiter, have massive storms but do not see such planet-circling giants. 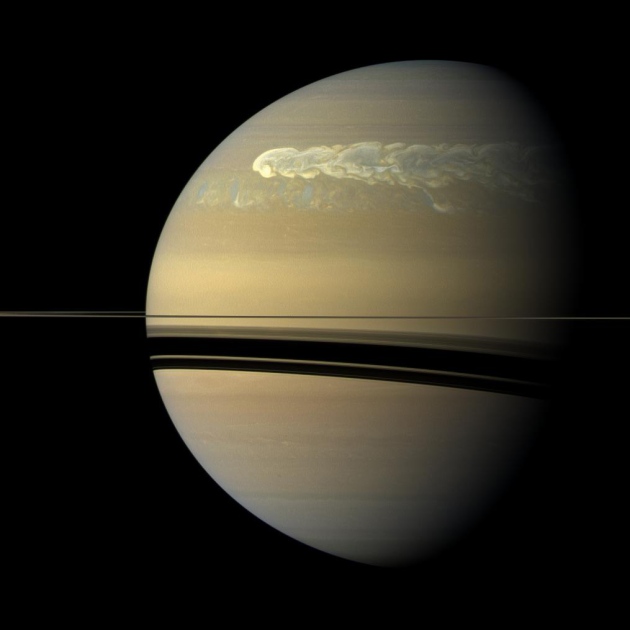 Cassini also probed a unique hexagon-shaped feature, some 30,000 kilometres across, at Saturn's north pole. Confined by winds flowing at more than 300 kilometres an hour, the hexagon is home to smaller hurricane-like vortices that rotate within it. Oddly, Saturn has no such feature at its south pole.

A six-sided, jet-stream-like swirl churns around the planet’s north pole.

Even Saturn's interior came into better focus thanks to the mission. The planet has a strong and complex magnetic field, generated by liquid churning deep within it. The bright auroras that glow around Saturn's poles served as guide posts by helping to reveal the patterns and intensity of its polar magnetic fields. 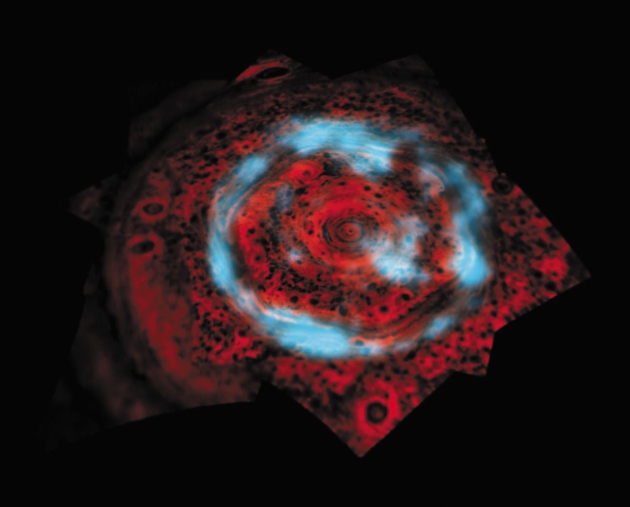 Glowing bands are created at the poles where the solar wind slams into Saturn’s magnetosphere.

Some fundamental mysteries remain. Mission scientists are still working to determine how long a Saturnian day is. Because the planet has no solid surface, researchers cannot track a fixed feature to measure its rotation rate. Instead, they have tried to measure its true spinning speed by observing the planet's powerful rotating radio emissions, which should reflect the movement of the magnetic field stemming from deep within. But Cassini found that these emissions were more intricate than expected, which complicates efforts to use them to understand the rotation rate. More-detailed information about the magnetic field may come during this final phase of the mission, as Cassini loops between the planet and its rings.

Although the mission will come to a close soon, it will leave behind a wealth of information for future studies. “Cassini's treasure of data is 100 times as broad and deep as Voyager's, and it will take decades to get to the bottom of it,” says Jeff Cuzzi, a planetary scientist at NASA's Ames Research Center in Moffett Field, California. “The end of Cassini's active operations may be only the beginning of real advances in our understanding of what it has discovered.”