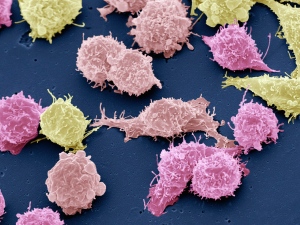 A cancer cell culture's response to treatment depends on its genes.

Two compendiums of data unite genetic profiling with drug testing to create the most complete picture yet of how mutations can shape a cancer’s response to therapy.

The results, published today in Nature1, 2, suggest that the effectiveness of most anticancer agents depends on the genetic make-up of the cancer against which they are used. One study found a link between drug sensitivity and at least one mutation in a cancer-related gene for 90% of the compounds tested.

Lab-grown cancer cells are a mainstay of research into the disease. The two projects catalogue the genetic features of hundreds of such cell lines, including mutations in cancer-associated genes and patterns of gene activation. They then match these features with how the cells respond to approved and potential drugs.

“This is a very powerful finding,” says Tom Hudson, president of the Ontario Institute for Cancer Research in Toronto, Canada, who was not affiliated with the work. “It could provide valuable information for designing clinical trials, and lead to more focused and less expensive approaches to drug development.”

Cancer treatments are increasingly being tailored to target particular genetic variants of the disease. Even so, drug companies still struggle to work out which patients are most likely to benefit from a drug in advance of clinical trials, says Levi Garraway, a cancer researcher at the Dana-Farber Cancer Institute in Boston, Massachusetts, and a co-author on the study.

Aiming to smooth the path to rational drug deployment, Garraway and his team compiled the Cancer Cell Line Encyclopedia, an assembly of genomic information for 947 cell lines, drug sensitivity for 479 of those lines, and 24 anticancer agents1.

Another team, led by Mathew Garnett of the Wellcome Trust Sanger Institute in Hinxton, UK, has created a similar profile using 639 tumour cell lines and 130 drugs2.

Both teams then searched through their compendiums, which are publicly available online, for associations between the cells' genetic features and their drug sensitivity. Both groups zeroed in on potential new avenues for treating Ewing’s sarcoma, a bone cancer that affects mainly children and young adults. The Sanger team, for example, found that some lines of Ewing’s sarcoma cells are sensitive to drugs called PARP inhibitors.

One of the PARP inhibitors tested has already been through several rounds of clinical trials for other cancers, and might make a speedy transition to testing against Ewing’s sarcoma, says Garnett.

Ultimately, however, the encyclopaedias will be most useful as a research tool, says John Weinstein, a computational biologist at the MD Anderson Cancer Center in Houston, Texas.

Results from cancer cell cultures do not always translate into the clinic. Cells grown in dishes are not surrounded by the body's other tissues, for example, and drugs added to cells in culture do not have to circulate through the body before reaching their target.

But the cells' amenability to genetic engineering and assessment by high-throughput screens testing thousands of compounds make them invaluable research tools. Weinstein notes that, as well as generating new markers to identify patients most likely to benefit from a given treatment, the encyclopaedias can help researchers to follow up clinical observations in the lab.

“If there is a particular response in the clinic, this could help researchers look more incisively at the mechanism behind that response,” Weinstein says. “All of this is part of the drive towards personalization of cancer therapy.”