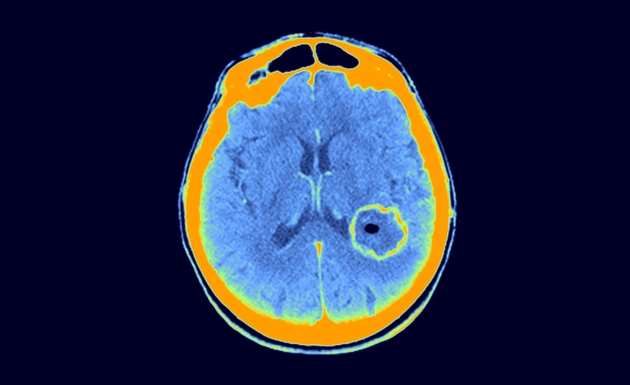 A brain tumour called glioblastoma, shown here as the circular region in a patient's brain scan, is among the cancers that have been tested in mouse avatars.

An analysis of more than 1,000 mouse models of cancer has challenged their ability to predict patients’ response to therapy.

The study, published today in Nature Genetics1, catalogues the genetic changes that occur in human tumours after they have been grafted into mouse hosts. Such models, called patient-derived xenografts (PDXs), are used in basic research and as ‘avatars’ for individual patients. Researchers use these avatar mice to test a bevy of chemotherapies against a person's tumour, in the hope of tailoring a treatment plan for the patient's specific cancer.

But fresh data from geneticists at the Broad Institute of MIT and Harvard in Cambridge, Massachusetts, suggest that transplanting human cancer cells into a mouse alters the cells' evolution, reshaping the tumour's genome in ways that could affect responses to chemotherapy.

“The assumption is that what grows out in the PDX is reflective of the bulk of the tumour in the patient,” says cancer geneticist Todd Golub, a lead author on the study. “But there’s quite dramatic resculpting of the tumour genome.”

No animal model is perfect, and researchers have long acknowledged that PDXs have their limitations. To avoid an immune assault on the foreign tumour, for example, PDXs are typically grafted into mice that lack a functioning immune system. This compromises scientists' ability to study how immune cells interact with the tumour — an area of increasing interest given the success of cancer therapies that unleash the immune system.

PDXs can also take months to generate, making them too slow to serve as avatars for those patients who need to make immediate decisions about their therapy.

But previous research had suggested that the PDXs were reasonably faithful reproductions of the human tumours they are meant to model, offering researchers a chance to explore the tumour’s interaction with its environment in ways that are not possible using cells grown in a Petri dish. The US National Cancer Institute has developed a library of more than 100 PDXs for distribution to researchers, and European scientists have launched EurOPDX, a consortium that boasts more than 1,500 models for more than 30 tumour types. One company, Champions Oncology of Hackensack, New Jersey, creates and tests mouse avatars for individual patients and for pharmaceutical companies to use in research.

For the latest study, Golub and Broad Institute cancer geneticist Rameen Beroukhim, together with their colleagues, decided to examine how PDXs changed over time. The researchers studied data from tumour cells that were implanted into a mouse, allowed to grow into a tumour, and then harvested and re-implanted into a fresh mouse — sometimes for multiple cycles.

The researchers looked for alterations in the number of copies of a given gene in the cell. They did so for more than 1,000 PDX samples representing 24 cancer types, often extrapolating gene copy number from data on gene expression.

The analysis suggests that tumours implanted in mice change in ways that are not commonly seen in the human body. For example, human brain tumours called glioblastomas tend to gain extra copies of chromosome 7. But the mouse PDXs tend to lose those extra copies over time, says Beroukhim.

Some of these genetic changes were also associated with differences in how the PDXs responded to cancer drugs. For researchers studying many PDXs and looking for relationships between genetics and drug sensitivity, the finding does not spell disaster, says Golub. “That’s not to say that PDXs should be abandoned as a model — far from it,” he says. “But they’re not a panacea.”

Golub is more worried about using PDXs to predict outcomes in individual patients. “It raises some important questions around how to interpret the results of avatars,” he says.

But Champions Oncology founder David Sidransky, an oncologist at Johns Hopkins University School of Medicine in Baltimore, Maryland, points to his team's study of 92 patients, published in August. That showed an 87% association between the drug responses in a patient and their corresponding PDX2.

The genetic analysis by Golub and his team could offer clues as to what goes wrong in the other 15% of PDXs, Sidransky says.

The work is important, says David Tuveson, a cancer researcher at Cold Spring Harbor Laboratory in New York. But Tuveson also notes that PDX approaches are changing. Researchers are increasingly likely to graft a human tumour into the analogous location in the mouse avatar — for instance, by transplanting human pancreatic cancer cells into a mouse pancreas — rather than merely grafting them under the skin. This, he says, is thought to be an environment that is more similar to that of the original tumour.

Researchers are also turning to mice that have been ‘humanized’ in various ways, perhaps by introducing aspects of a human immune system or human versions of proteins that interact with the tumour.

As for those PDXs that have already been generated, researchers will continue to embrace them, says Carlos Caldas, a researcher at the Cancer Research UK Cambridge Institute at the University of Cambridge, UK.

Caldas notes that his own studies with breast cancer PDXs have not found such dramatic differences between PDXs and the tumours from which they were made. “We’re going to continue to see a lot of activity with these models — they are a great development, not a hindrance,” he says. “They are here to stay.”