An animation of tsunami waves propagating across the Pacific Ocean after a magnitude-7.7 earthquake struck the Haida Gwaii archipelago in British Columbia, Canada, in 2012.

A study of the magnitude-7.7 earthquake that shook the northern coast of British Columbia, Canada, last October has solved a longstanding argument about the region’s geology. The finding suggests that even Pacific islands as far away as Hawaii might need to worry about tsunamis originating from this part of the Canadian coast.

Most of the tsunami threat in North America's Pacific Northwest stems from the Cascadia fault, where the Juan de Fuca crustal plate dives beneath Washington, Oregon, and parts of California and British Columbia. The 2012 quake struck north of that region, where the Pacific crustal plate slides towards Alaska along a major geological fault known as the Queen Charlotte. 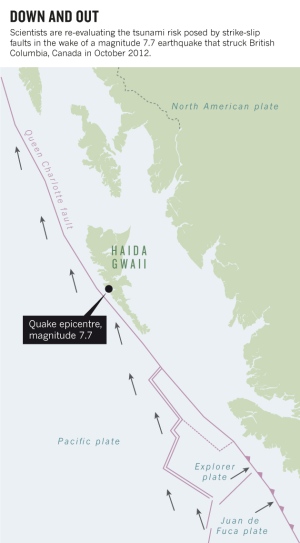 Many scientists had thought that this 'strike–slip' motion would not yield big tsunamis, because the two sides of the sea floor move along the horizontal axis, displacing less water than shifts upwards or downwards. But on 27 October 2012, the sea floor near the Haida Gwaii archipelago ruptured along a fault perpendicular to the Queen Charlotte fault. The quake shoved a chunk of Pacific sea floor directly under the North American continent, pushing it upwards and creating the sort of vertical motion that can generate sizeable tsunamis (see 'Down and out').

Thorne Lay, a seismologist at the University of California, Santa Cruz, and his colleagues describe this 'thrust' geometry in a paper published on 11 June in Earth and Planetary Science Letters1. The work confirms that big, dangerous quakes can happen in this region — an idea suggested by researchers at the Geological Survey of Canada in the 1980s, but one that had not been widely recognized, Lay says.

The earthquake was the second largest ever recorded in Canada by scientific instruments. It sent tsunamis rushing at least 7.6 metres up the rugged and sparsely populated western coast of Haida Gwaii. "If it had occurred in the summer, there may well have been people in harm's way,” says Lucinda Leonard, a geoscientist at the Geological Survey of Canada in Sidney, British Columbia, who led a recent assessment of Canada's tsunami hazards2.

The quake also sent waves racing much farther afield. Forecasters sent alarms to Hawaii, 4,000 kilometres away in the middle of the Pacific Ocean. Coastal areas of several islands were evacuated, leading to huge traffic jams. And when the tsunami that materialized was smaller than anticipated — no more than 80 centimetres — people were not impressed.

"My friends on the north side of Oahu felt like they'd been put in harm's way” in the rush to evacuate to higher ground, says Lay. "We need to better anticipate when there will be dangerous waves."

Lay thinks that the forecasters did the right thing by erring on the conservative side and warning of a tsunami that was bigger than what actually arrived. But next time, he says, they may do a better job, as they can plug data from the Haida Gwaii quake into models and refine their predictions.

The Queen Charlotte fault itself is unlikely to break again in the near future but geologists may need to rethink whether thrust faults near strike–slip ones could break unexpectedly. The 1989 Loma Prieta quake, near San Francisco, California, also had a surprising amount of vertical movement along a strike–slip fault, says Lay.