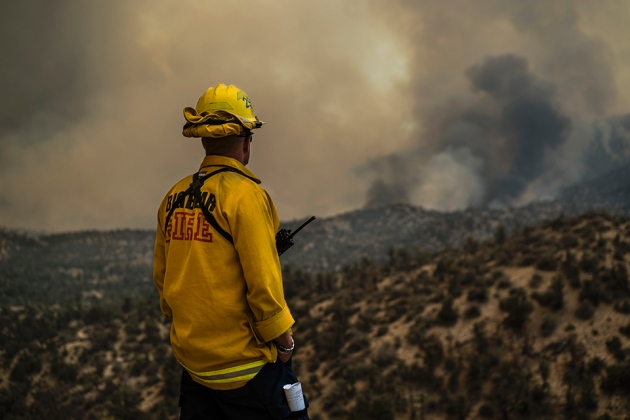 Three brown, withered lawns surround David Behar’s home in Marin County, north of San Francisco in California. Behar, who directs the climate programme at the San Francisco Public Utilities Commission, no longer waters his grass — after several years with next to no rainfall, he gave in and brought greenery to his home in the form of drought-resistant plants instead. It is just one of the many adjustments that Californians have had to make as the state enters its fifth year of drought (see ‘Dry state’).

As of 30 September — the end of the 2015 ‘water year’ — the state’s water supplies are desperately low. The spring snowpack is the paltriest ever measured — by April it contained just 5% of a normal year’s water — and by the end of August the major reservoirs held 59% of their historical average. Wildfires have burned through almost three times more land than they do in an average year. And there are myriad ecological impacts, including more patches of dead foliage than usual in the canopies of the state’s iconic giant sequoia trees.

Yet despite the severe lack of rainfall, the state’s biggest consumer of water has fared remarkably well. Agriculture last year generated revenues that were just 1.4% lower than in 2013, when it took in a record US$34 billion, according to the Pacific Institute, a think tank in Oakland, California. Agriculture-related employment reached a record high of 417,000, and the amount of land being used for farming had fallen by less than 10% from pre-drought levels.

But that has come at a cost. Farmers have sustained production mainly by pumping up huge amounts of groundwater. “The massive overdraft of groundwater to make up for lost surface water has buffered farmers, and that can’t continue forever,” says Pacific Institute president Peter Gleick. In August, NASA reported that the massive increase in pumping has caused parts of the state to sink by 33 centimetres in less than a year. Some households that rely on wells have been left without water to shower or wash dishes. 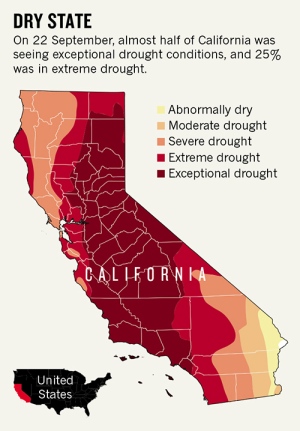 Efforts to regulate water use are being hampered by a lack of data on groundwater withdrawals, Gleick says. “We don’t know who’s using how much,” he says. “There are really big gaps in the data.”

Clouds on the horizon

The weather looks set to change, although only in the short term. The US National Oceanic and Atmospheric Administration predicts that this winter will see a strong El Niño, a storm pattern that has delivered extremely wet winters to California in the past. But plentiful rains are by no means certain, especially for regions outside southern California. “It remains to be seen whether an El Niño will provide relief this year,” Behar says.

But the rains are unlikely to last for long. A team led by climatologist Noah Diffenbaugh of Stanford University in California has used historical data and climate models to show that global warming is increasing the odds of the state seeing warm, dry conditions similar to those that spawned the current drought (N. S. Diffenbaugh et al. Proc. Natl Acad. Sci. USA 112, 3931–3936; 2015).

The droughts could even last for many decades. By incorporating palaeoclimate data into climate models, Benjamin Cook of the NASA Goddard Institute for Space Studies in New York City and two co-authors are predicting droughts that could last as long as 35 years (B. I. Cook et al. Sci. Adv. 1, e1400082; 2015).

“We’re in a new climate, and it’s a climate in which the probability of severe drought conditions is elevated,” Diffenbaugh says. “That recognition is really critical.”

The state is working hard to respond to the dire warnings. In April, governor Jerry Brown called for a 25% reduction in municipal water consumption. Californians managed to save even more than that in both June and July, even though that is when irrigation needs tend to be highest. Last September, Brown signed legislation that takes the first steps towards regulating groundwater use by asking localities to make plans to ensure the sustainability of their groundwater supplies. However, some complain that he has not been tough enough. The path to sustainability does not need to be in place until 2040 — that is hardly an aggressive timeline, says Gleick.

And in June, the state’s water board ordered some of the most-senior water-rights holders — the farmers and irrigation districts entitled to draw first in times of shortage — not to take water from rivers and streams. Some irrigators have responded with lawsuits that are still working their way through the courts.

The state’s water-rights system is said to discourage conservation, because rights holders with priority may see their water allotments cut if they do not use their allocations in a given year.

Meanwhile, Behar and other planners around the state are pushing technological fixes that range from less-water-intensive agriculture and more-efficient home appliances to treating wastewater for reuse. Orange County already pumps treated wastewater into its groundwater; San Diego is developing a similar system and, on 8 September, the San Francisco Public Utilities Commission approved a plan to recycle wastewater to irrigate Golden Gate Park.

Steven Ritchie, the commission’s assistant general manager for water, says that some regions are even looking into the long-discussed idea of desalination — a perennial option that is seldom used because it is energy intensive and therefore expensive. Ritchie says that one idea on the table for the region would be to cut the cost by desalinating brackish water from the San Francisco Bay Delta, rather than ocean water. Water produced in that way would cost about as much as that pumped from wells, Ritchie says, but would still be more costly than surface water. “The choice might be: expensive water, or no water,” Ritchie says. “We have to continue to plan for the future and diversify our supply; we cannot take anything for granted.”