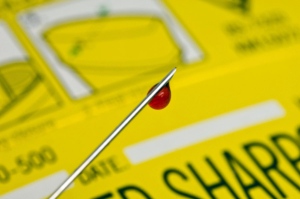 Detecting a tumour's genetic material in blood would be less invasive than taking tissue samples with a biopsy.

A blood test for DNA shed by dying tumour cells might one day be used to track a patient's response to therapy, results from a pilot study in breast cancer suggest. The technique would provide an alternative to invasive biopsies that retrieve tumour tissue for analysis.

The study tracked free-floating tumour DNA isolated from the blood of 30 women with advanced breast cancer. The results indicate that the quantity of tumour DNA in the blood could reflect the extent of a patient’s cancer1.

The results will need to be replicated in a much larger, randomized trial before the technique can enter routine clinical use, says Carlos Caldas at the Cancer Research UK Cambridge Institute, one of the leaders of the work. But the results of the current study, the largest of its kind, are cause for optimism that the technique could quickly and easily monitor the responses of patients to treatment, he adds, particularly when repeat biopsies would be prohibitively expensive and invasive.

“This is a powerful technology,” agrees Daniel Haber, a cancer researcher at the Massachusetts General Hospital Cancer Center in Boston, who was not involved with the study. “It can be very scalable, inexpensive, and useful.”

Needle in a haystack

Depending on the extent of the disease, tumour DNA can make up anywhere from less than 1% to 50% of the cell-free DNA found in blood plasma, says Caldas.

In essence, the assay is analogous to the new wave of prenatal genetic tests that use tell-tale markers to find fetal DNA circulating in the mother’s blood. In the case of the tumour study, the researchers quantified the amount of tumour DNA in the blood by looking for cancer-associated mutations, focusing primarily on two genes, TP53 and PIK3CA.

That search is both the method’s strength and its weakness, points out Klaus Pantel, a cancer researcher at the University Medical Centre Hamburg-Eppendorf in Germany, who has also studied circulating tumour DNA. Assays for specific mutations can be very sensitive, but not every tumour will have those markers, he notes.

Indeed, Caldas and colleagues' study began with samples from 52 women, but only 25 contained the hallmark mutations in TP53 and PIK3CA. Full genome sequencing revealed markers that could be used to track tumour DNA in five of the remaining patients. “I think in every breast cancer you’ll find at least one mutation to monitor,” Caldas says, although for some patients, that will require tailoring the technique specifically to them.

Haber and Pantel agree that the technique will complement a growing range of noninvasive alternatives to biopsies. Many labs are developing ways to chart the course of cancer by monitoring cells that slough off of the tumour and enter the bloodstream. These circulating tumour cells are more difficult to isolate than free DNA, but can reveal additional information about RNA and protein levels, notes Pantel.

Caldas pitted his technique against an assay for circulating tumour cells called CellSearch, produced by Veridex in Raritan, New Jersey, which has been approved by the US Food and Drug Administration for the prognosis of advanced breast, colorectal and prostate cancers. His cell-free DNA technique was more sensitive, Caldas notes, but Haber counters that the field has advanced dramatically since CellSearch was developed, and a larger study would be needed to fully compare the two techniques.

The suite of new methods promises to revolutionize the way that cancer has been treated over the past 50 years, Haber says. “It’s a whole new universe of diagnostics.”