With sales of more than $100 billion since it was introduced in 1997, the cholesterol-lowering drug Lipitor (atorvastatin) is an unparalleled pharmaceutical superstar. But as its patent expires on 30 November and its first generic competitor takes the stage, Lipitor is also a painful reminder of the challenge that such ‘patent cliffs’ pose for the big drug companies, including Lipitor’s developer Pfizer, based in New York.

“The industry is truly in crisis mode,” says Ken Kaitin, director of the Tufts Center for the Study of Drug Development in Boston, Massachusetts. “Companies realize they have to change.”

Including Lipitor, patent expiries in 2010–13 will jeopardize revenues amounting to more than US$95 billion for ten of the largest drug companies (see ‘Peering over the patent cliff’). But the real problem is much deeper, says Peter Tollman, managing director of the Boston Consulting Group. “The patent cliffs wouldn’t be such a big issue if research and development productivity hadn’t collapsed.” 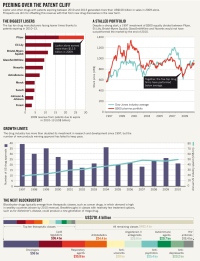 A decade ago, investors began to realize that the pharmaceutical industry, which once rewarded them with double-digit growth rates, faced a perilous future. Someone buying $100 worth of Pfizer stock in 1986 would have seen it grow in value to $2,139 by 1999. But by the end of 2010, that investment would have shrunk to $1,629. Research and development (R&D) budgets soared, but the rate at which new drugs were approved did not. Frederick Frank, vice-chairman of the Peter J. Solomon Company, an investment bank based in New York, has estimated that to sustain a 10% annual growth in sales, Pfizer would have to introduce a minimum of 11 new products, each earning about $750 million, each year.

Investors recognized that the industry would not be able to sustain that kind of growth. By 2000, pharmaceutical pipelines were filled with ‘me too’ drugs that offered low risk and a quick route to approval, but only marginal improvement over drugs already available. As regulatory standards rose and key markets became crowded with competitors, many of them cheap generics, the industry began to suffer from what some have called ‘better than The Beatles’ syndrome. “Imagine if you weren’t allowed to publish music unless you were better than The Beatles,” says Tollman. “And The Beatles were being given out for free while you had to sell yours at full price.”

So shareholders walked away. “Investors looked at the industry and said, you’re not doing anything innovative,” says Kaitin. “At the end of the day, the odds of actually getting a product to market were getting worse, and investors started dropping out.”

To cope with the worsening situation, drug companies have slashed R&D costs (see Nature 470,154; 2011) and forged outside collaborations with other firms and with academia (see Nature 474,433–434; 2011). Pfizer aims to trim its R&D budget by up to $3 billion between 2010 and 2012, and the Michigan site that developed Lipitor was shuttered in 2007. Some drug companies, such as London-based GlaxoSmithKline, have boasted a renewed emphasis on risk-taking and innovation, to get away from the ‘me too’ era. Whether this strategy will pay off remains to be seen — it takes upwards of a decade to develop a new drug.

Kaitin notes that Eli Lilly, a relatively small company based in Indianapolis, Indiana, is taking the second-largest hit from patent expiries in 2010–13. Not surprisingly, Lilly has dramatically revamped its R&D programme, forging new relationships with academia and contract-research organizations.

“The patent cliffs wouldn’t be such a big issue if research and development productivity hadn’t collapsed.”

Could another round of mass-market blockbusters reverse the trend? Unlikely, say industry watchers. Companies are increasingly moving towards niche drugs based on personalized medicine, says Kaitin — although there are exceptions. Swiss drug-maker Roche, based in Basel, is developing a cholesterol drug called dalcetripib that has a different target from Lipitor, and which analysts predict could bring in $10 billion per year, notes Tollman. Companies are still highly focused on diabetes drugs with potentially large markets, and if an effective treatment is developed for Alzheimer’s disease, “that’s going to do unbelievably well”, he adds.

Even so, Kaitin cautions that new blockbusters are likely to be short lived. Lipitor owed its success in part to working better than other drugs, with few side effects, in a class where demand for effective therapies is high. Now, many companies are flocking to the same drug targets, which means that the first of a kind to be approved won’t enjoy a monopoly for as long as older drugs did. “We won’t see drugs with the longevity of Lipitor,” Kaitin says. “We’ll see drugs that sporadically reach very high levels of revenue, and then come down.”

Originally, this article included a graph showing a hypothetical stock portfolio for an investment of $500 equally divided between Pfizer, Eli Lilly, Bristol-Myers Squibb, GlaxoSmithKline and Novartis. The graph omitted the effects of dividends and stock splits and so it erroneously gave a loss of 39%, when the investment should instead have risen by 82%. Similarly, in the article’s text, it said that $100 worth of Pfizer stock in 1986 would have grown to $168 by 1999 and decreased to $20 by the end of 2010. In fact, those figures should have been growth to $2,139 by 1999 and a decrease to $1,629 by the end of 2010. The article and the graph have now been corrected to reflect this. See also D. Brindley et al. Nature 481, 265 (2012).