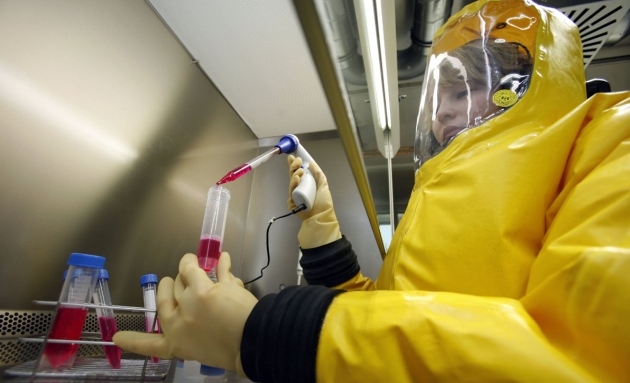 Biosafety measures that are mandatory in the West are not always possible in developing nations.

Biocontainment labs across the Asia-Pacific region all too often fail to live up to the term. An inspection of dozens of labs has found that nearly one-third of the biosafety hoods intended to protect workers from deadly pathogens did not work properly — an offence for which a Western lab could be shut down. In one facility, only a shower curtain enclosed a table on which the brains of rabid dogs were routinely dissected.

Such deficiencies are symptomatic of a biosafety crisis in many of the laboratories that diagnose and study infectious agents in developing countries, say biorisk experts who attended a meeting at London’s Chatham House on 17 May, where the results of the inspection were presented. The weaknesses could have repercussions around the globe if pathogens were released. “The strength of a chain is based on its weakest link, and developing countries are the weakest link,” says Teck-Mean Chua, former president of the Asia-Pacific Biosafety Association based in Singapore, which co-sponsored the anonymized laboratory inspection.

Complaints of inadequate lab protocol in developing countries may not surprise many biologists, but they are attracting attention as scientists and research agencies in the West place increasing emphasis on biosafety. Discussions at the meeting skirted around the controversies surrounding the publication of research on mammal-transmissible forms of the H5N1 influenza virus (see page 431). However, attendees did talk about how measures to protect lab workers and contain pathogens would affect research on diseases such as flu.

In most Western countries, rules on biosafety — meant to safeguard lab workers against infection — and biosecurity, which protects the general public, became much stricter after 2001, when anthrax attacks in the United States raised the spectre of bio­terrorism using laboratory-prepared pathogens. But stringent biosafety and biosecurity rules are unworkable in many developing countries, where researchers often need to handle infectious agents such as anthrax and plague to protect public health, but lack the infrastructure of the West, says Nigel Lightfoot, an associate fellow at the Centre on Global Health Security at Chatham House, who chaired last week’s meeting. “When you don’t have any electricity, the answer is not to build a very high-security laboratory,” he says. “You’ve got to move away from the costly bells-and-whistles solutions to what is practical.”

Speakers suggested solutions such as small biocontainment boxes, for example, and also pointed out that pathogens that are endemic in a particular region present a lower biosecurity risk there than in Western laboratories. “We cannot stop them from working on things they need to for the health of their countries,” says Tim Trevan, executive director of the International Council for the Life Sciences, a non-governmental organization based in Arlington, Virginia, which is interested in biosafety and biosecurity in the Middle East and Africa.

Lightfoot believes that “you’re going to have dual standards” to cover different areas. But having two sets of lab rules may not sit well with either side, says Nicoletta Previsani, who heads the biorisk-management team at the World Health Organization (WHO) in Geneva, Switzerland. Scientists in developing countries may feel that they are being left with less-than-safe labs, whereas those in richer countries could feel overburdened by regulations that others don’t have to follow.

Some meeting attendees, including Chua, called on the WHO, the Food and Agriculture Organization of the United Nations in Rome and the World Organisation for Animal Health in Paris to take the lead in establishing global standards for lab safety and security.

But Previsani says that such organizations cannot tell their member states how to operate their labs. Lightfoot adds that the WHO lacks the money and staff to act as a regulator. In January, the agency issued a five-year plan on laboratory biorisk management, in which it emphasized that it would be better placed in an organizational role, coordinating activities between stakeholders (see go.nature.com/xd9vdj).

Lightfoot argues that networks of non-governmental organizations and biosafety bodies ought to press developing nations to institute better lab standards. Donors could also help by paying more attention to the long-term sustainability of labs that they help to establish, adds Toby Leslie, an epidemiologist at the London School of Hygiene and Tropical Medicine, who has trained lab workers in Afghanistan. Too often, he says, money is spent on infrastructure and equipment without considering whether the laboratories can be operated safely by knowledgeable staff for years to come. A planned national health laboratory in Kabul, for instance, will need long-term support for maintenance and training. “I can’t see a way that Afghanistan is going to be able to support it independently,” says Leslie.