Scientists develop reputations that often work to their advantage. A study suggests that the presence of a well-known scientist on a list of authors can drive citations of the paper, regardless of the merits of the research — especially soon after its publication. The report rapidly started an online discussion. “How scientists too can be famous for being famous,” tweeted Ed Rybicki, a virologist at the University of Cape Town in South Africa. Naupaka Zimmerman, a microbial ecologist at the University of Arizona in Tucson, took to Twitter to ask: 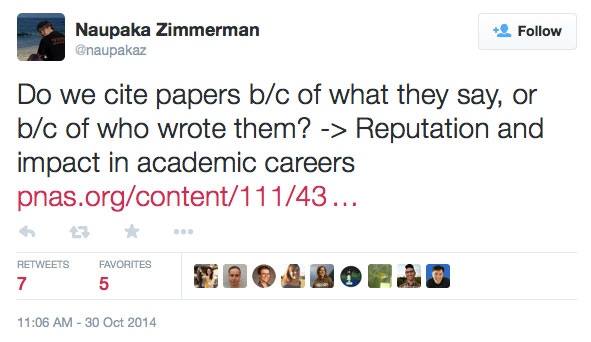 The study, published in the Proceedings of the National Academy of Sciences (PNAS)1, used citations and publication history to calculate the reputation scores of 450 high-profile scientists from cell biology, physics and mathematics. It found that a tenfold increase in a scientist’s reputation could boost the citation rate for a new paper by 66% — an effect that tapers off after the paper receives a large number of citations. The authors suggest that this big-name effect helps to perpetuate a “rich-get-richer” system of science, and could drive some scientists to “game” the system by often citing their own work, for example.

In an interview, Rybicki said that reputations can carry too much weight in science. “Names often matter more than ideas in published papers,” he says. “I have seen good work ignored because it didn’t come from a trendy or famous lab.” Conversely, he adds, he has also seen shoddy papers by famous researchers in top-tier journals. Good reputations sometimes come from increased exposure in the media rather than from good science, he notes.

Zimmerman, however, says that solid reputations are generally well-earned. “Quality scientific output over time is an incredibly difficult metric to fake or rig,” he says. He adds that it is natural for researchers to quickly latch on to something like reputation to decide which studies are worth citing, given the dizzying number of papers being published every day.

Name recognition might not always be a good thing for the researcher though. Laura Piddock, a microbiologist at the University of Birmingham, UK, tweeted: 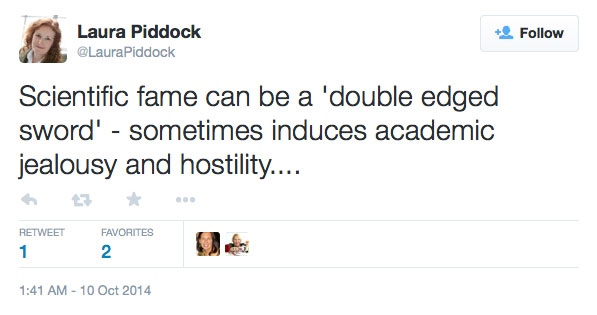 Piddock says that researchers who are not especially well-liked might have a harder time getting funding or recognition for good work.

The authors of the PNAS paper suggest that double-blind peer review could be one way to increase fairness and blunt the advantage of big names in science — an idea that has been gaining some momentum. All scientists have unconscious biases, Piddock says, so anything that takes names out of the equation would be a positive step.