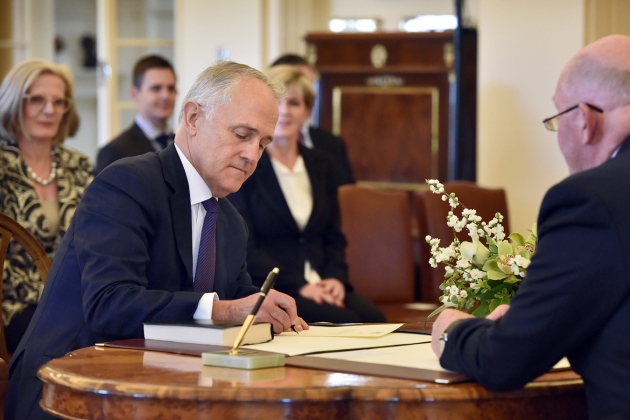 Malcolm Turnbull is sworn in as Australia's prime minister in Canberra on 15 September.

But new prime minister Malcolm Turnbull has already signalled that he will not change-climate targets leading up to the United Nations global-warming summit in Paris this December.

An abrupt political coup led to Turnbull taking office on 15 September, after ousting Tony Abbott as leader of Australia’s conservative Liberal party, the majority party in the ruling coalition.

Abbott, a climate-change sceptic, oversaw cuts to the nation’s research funding — in particular to Australia’s premier science agency, the Commonwealth Scientific and Industrial Research Organisation (CSIRO). But Turnbull is a former environment minister who (when the Liberal party was in opposition), tried to back action to curb carbon emissions, and who is known to support market-driven technological innovation.

"We know that our future lies in technology. It lies in science. It lies in all of the new industries," Turnbull said in his first appearance in Australia's parliament as prime minister on 15 September.

“A lot of people at CSIRO will be happy with the news that Turnbull is in power,” says Peter Tangney, who studies science policy at Flinders University in South Australia.

“Science had a tough run under the Abbott government’s short-term view, but recognizing that research is a major driver of economic growth, I really hope that the Turnbull government will take a much longer-term strategic view of science policy,” adds Leslie Field, secretary for science policy at the Australian Academy of Science.

Turnbull made part of his personal fortune investing in technology companies in the 1990s. First elected to parliament in 2004, he was charged with managing water resources during a severe drought, and promoted to environment minister in 2007, in the government of John Howard. In this role, he helped to implement the Murray-Darling Basin Plan, responding to scientists' calls to address critical water shortages.

In 2008, he was voted leader of the Liberal party, then in opposition. But in 2009, his support for an emissions-trading scheme (later scrapped) proposed by Kevin Rudd's government proved unpopular, and he lost the party's leadership to Tony Abbott.

Since then, Turnbull has trod a careful path on climate policy. Challenged on pollution targets in his first parliamentary appearance as prime minister, he said that the emissions cuts proposed under the Abbott government were “very substantial”, and “in line with other comparable economies”.

That policy, which sets an emissions target for 2030 of 26–28% below 2005 levels, is weaker than that called for by the Climate Change Authority, an Australian agency that provides independent advice to government on emissions reductions. John Connor, head of the Sydney-based Climate Institute, a policy think-tank, has called the targets “pathetically inadequate”.

“My general sense is that people are more optimistic than they should be. Turnbull has already said that he is not changing climate policy,” says Tim Flannery, the head of the Climate Council, a private body based near Sydney that provides independent information on climate change.

Turnbull’s first opportunity to make substantial changes may come with his first budget, due in May 2016. But the prime minister may be constrained by his conservative colleagues in a government that holds power through a long-standing coalition arrangement with the National Party, says Flannery.

“Whether he can engender enough support across the parliament to have an enduring change in the way we invest in new innovation is another matter — but let’s hope so. He is the best shot we have had at that for many years.”