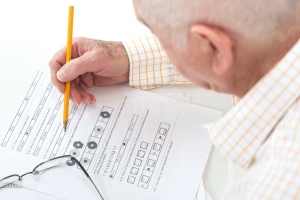 The physical changes in the brain associated with Alzheimer's disease are difficult to detect before clinical symptoms appear.

Skin cells from patients with Alzheimer’s disease have been reprogrammed to form brain cells, offering clues to their dementia and, for others, the prospect of early diagnosis and new ways of finding treatments.

An estimated 30 million people worldwide have Alzheimer’s disease, which causes neurodegeneration and typically strikes late in life. The disease is nearly impossible to diagnose before symptoms develop, and no drugs exist at present that can change its course.

Scientists aiming to learn the causes of Alzheimer’s have looked to brain biopsies of patients after they die, blood tests and animals as diverse as fruitflies and fish. Until recently, it has not been possible to probe the neurons of Alzheimer’s patients before they show symptoms.

“By the time you can see dementia in a person, their brain cells have been behaving in an abnormal way for years, perhaps decades or longer,” says Larry Goldstein, a neuroscientist at the University of California, San Diego, who led the study published online today in Nature1.

Goldstein and his team created induced pluripotent stem (iPS) cells from four patients with Alzheimer’s and two people without dementia. iPS cells are made by treating fibroblasts, a type of skin cell, with reprogramming factors to revert them to an embryonic-like state. Like the stem cells in early embryos, iPS cells can form any tissue in the body — including neurons.

The researchers generated neurons from patients with two types of Alzheimer’s: familial, which is caused by inherited, rare mutations in specific genes, and sporadic, which results from an interplay of genetic and environmental factors.

Alzheimer's in a dish

Larry Goldstein discusses his research with the Nature podcast team.

The reprogrammed neurons from the patients with familial Alzheimer’s showed defects that had been seen before in the brains of Alzheimer's patients. Compared to unaffected cells, their neurons produced higher levels of amyloid-β, a protein that builds up and forms plaques in patients with Alzheimer’s. This is not surprising, as their mutation is in a gene that encodes amyloid-β. But their neurons also produced high amounts of another protein, tau, which forms tangles in the brains of patients.

One of the two patients with sporadic Alzheimer’s disease produced high amounts of amyloid-β and tau, whereas the other produced amounts comparable to those seen in people without dementia. Goldstein suggests that environmental factors may have had a bigger role in the latter case, or that perhaps other kinds of brain cells underlie their disease.

Many researchers are concerned that these "disease-in-a-dish" models based on iPS cells may not be true reflections of the disease, but may be artifacts from the reprogramming process (see The growing pains of pluripotency). But previous research has shown that Alzheimer’s neurons reprogrammed using a different method show some of the same molecular defects2 seen in the familial-Alzheimer’s cells in Goldstein’s study. Those neurons came from patients with mutations in a different Alzheimer’s disease gene. This suggests that both teams are seeing bona fide changes in the neurons from patients with familial Alzheimer’s and not random differences resulting from reprogramming, says Asa Abeliovich, a neuroscientist at Columbia University in New York, who led the earlier study.

Abeliovich is less certain that the neurons derived from patients with sporadic Alzheimer’s are showing genuine signs of the disease. Unrelated genetic variations or other manipulations involved in making iPS cells could be at play. “I think it's very hard to say whether this is simply chance,” he says.

Goldstein concedes that researchers will need to study reprogrammed neurons and other brain cells from many more Alzheimer’s patients to garner real insight into dementia and its causes.

But the hope is that such cells will help scientists to develop new drugs and match them to individual patients based on how their repgrommed brain cells respond. Reprogrammed cells could even be used to diagnose people with Alzheimer’s decades before they show symptoms, Goldstein says. This would be of little use without proven therapies, but early diagnoses could help scientists select patients for clinical trials, he says.

“We’re in a terrible situation with a very common, devastating disease. It’s devastating financially and it’s devastating emotionally to the families who have to cope with it, and we have nothing to give patients that will work,” Goldstein says.