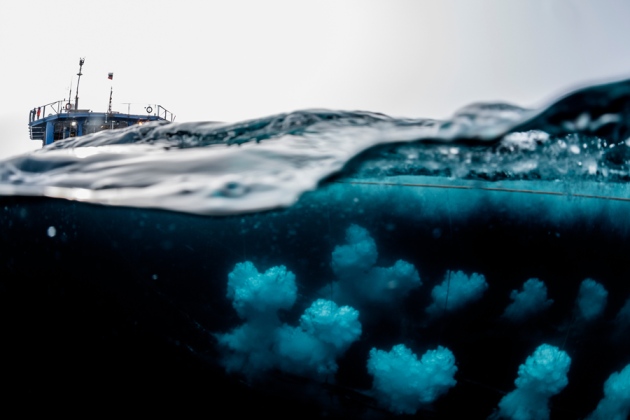 A ship operates an air-gun array while looking for oil deposits off the coast of Greenland.

Powerful sound waves created during offshore surveys for oil and gas can kill microscopic animals at the base of the ocean food chain, according to a new study. And these lethal effects travel much farther than ecologists had previously assumed. Researchers fear that damage to these animals, collectively known as zooplankton, could harm top predators and commercially important species of fish that depend on such species for food.

Seismic surveys blast compressed air to produce pulses of sound that can probe the sea floor thousands of metres down for natural resources. At 220–250 decibels, the pulses produced by these air guns are louder than a Saturn V rocket during launch. Scientists have known for decades that whales and other marine mammals that use sound to communicate change their behaviour in response to such noise1. There is increasing evidence that seismic surveys also affect fish2 and marine invertebrates3. And now, researchers have found that the noise from air-gun blasts can kill zooplankton at distances of up to 1.2 kilometres away — more than two orders of magnitude farther than previously thought. They reported their results4 on 22 June in Nature Ecology and Evolution.

“We were quite gobsmacked,” says lead author Jayson Semmens, a marine biologist at the University of Tasmania in Hobart, Australia. 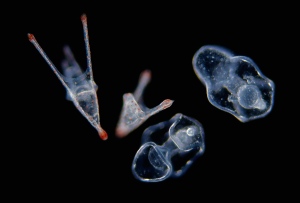 Sea-urchin larvae (with spikes) are one of many zooplankton groups harmed by air-gun blasts.

Semmens and his team conducted their study off the southeastern coast of Tasmania in 2015. They used sonar and nets to assess populations of zooplankton, including krill larvae and tiny crustaceans called copepods, before and after firing a series of air-gun shots. The team found that zooplankton abundance dropped by 64% within one hour of the blasts. And the proportion of dead zooplankton increased by 200–300% as far away as 1.2 kilometres — the maximum distance the researchers sampled. This suggests that the impact of the blasts could extend well beyond such distances, Semmens says.

“Dead bodies in net tows don't lie,” says Doug Nowacek, a marine ecologist at Duke University Marine Laboratory in Beaufort, North Carolina, who was not involved in the study. He suggests the next question for researchers is figuring out what this means for the ocean ecosystem. “If you start impacting the zooplankton population, that can cause a serious cascade through the food web.”

The results come as US President Donald Trump proposes opening up large swathes of the Atlantic coast of the United States to seismic surveys. The US Bureau of Ocean Energy Management is considering permit requests from six companies to conduct seismic surveys that were denied under former President Barack Obama (see ‘Under consideration’). As part of that process, the National Oceanic and Atmospheric Administration (NOAA) must also evaluate permit requests from those companies since their proposed activities could affect marine mammals. The NOAA permit requests are open for public comment until 6 July.

Although it's unclear if the companies will be able to start seismic surveys, initiating the permit process is part of a larger effort — laid out in an executive order that Trump issued in April — to expand US offshore energy development. 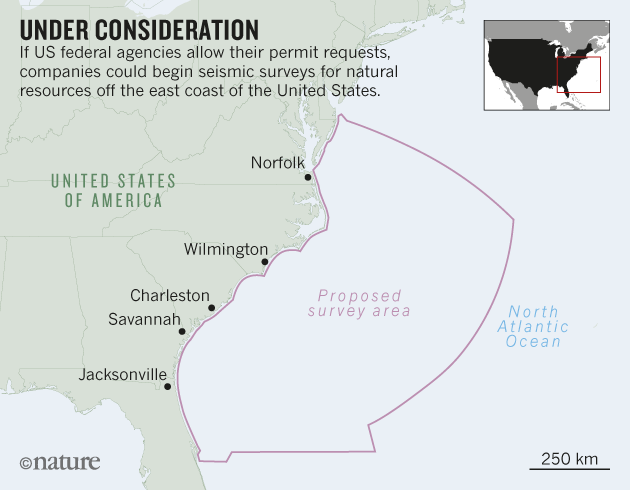 The study didn't pin down precisely how air-gun blasts kill zooplankton, Semmens says, but the noise they produce probably damages the highly sensitive hair-like receptors that the animals use to navigate. The blast might not kill them all directly, but it could disorient them and make it harder for them to survive.

Semmens is planning a follow-on study with a full seismic air gun set-up similar to that used in industrial activities to determine how far the effects of the noise extend. He and his team also want to look at what these blasts do to zooplankton physically. Although most research has focused on the impact of air-gun blasts on marine mammals, Semmens notes, perhaps it’s the invertebrates that are most at risk. “It could be that our focus has kind of been blinkered because it’s been on whales,” he says. “Invertebrates are the forgotten ones.”

An earlier version of the caption accompanying the picture of zooplankton implied that all the organisms were sea-urchin larvae.