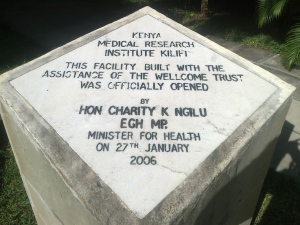 Funding from Britain’s Wellcome Trust is a cornerstone of the Kenya Medical Research Institute’s programme in Kilifi.

The Kenya Medical Research Institute (KEMRI)–Wellcome Trust Research Programme is often seen as a model North–South partnership. African-run and mainly European-funded, it has trained dozens of African PhDs and done important research on malaria and other tropical diseases.

Yet in a court case that reawakens sour memories from colonial history, it now finds itself accused of exploiting African employees and holding back their careers compared with colleagues from developed countries. KEMRI denies the charges.

The case, which pits six African researchers, known as the KEMRI six, against the institute, highlights perceptions of unequal treatment that are common in joint programmes. Many prominent research institutions in Africa have evolved from field stations that once belonged to Europe, and although most are now owned locally, they remain dependent on funding and administrative support from their erstwhile masters.

“It is fair to say that this is an issue,” says Marcel Tanner, director of the Swiss Tropical and Public Health Institute in Basel, which partners with health-research centres in Tanzania, Ivory Coast and Chad. Partnerships between rich and poor nations inevitably generate tensions, and those are exacerbated when the split between the haves and the have-nots runs along racial or former-colonial lines, says Kelly Chibale, a Zambia-born biochemist who trained in Britain and the United States, and who now leads a drug-discovery centre at the University of Cape Town in South Africa. “There are tensions everywhere in science — but where the former colonial master is involved, it takes on a different dimension.”

The KEMRI six — Samson Gwer, Michael Mwaniki, Nahashon Thuo, John Wagai, Moses Ndiritu and Albert Komba — were all medical officers or clinical research officers working towards PhDs, or about to start doing so, as part of the KEMRI–Wellcome Trust Research Programme in Kilifi, Kenya. The programme has a mixture of African and European staff, is run by the University of Oxford, UK, and gets most of its funding from the Wellcome Trust, a British medical charity that has funded research in Africa for many decades. Neither body is a defendant in the case. “We are aware that allegations have been made concerning the KEMRI–Wellcome Trust research programme in Kenya,” the trust said in a statement. “However, an investigation carried out by KEMRI found no evidence to support the serious allegations made by the researchers.”

In their submission to Kenya’s high court on 5 December 2011, the KEMRI six describe their treatment at the programme as “modern day slavery”, alleging that they were passed over for promotion, training opportunities and grants while their white colleagues flourished. They also say that their work was stolen and given to researchers in the developed world, and that they were paid less than foreign colleagues with equivalent qualifications on the programme.

The six say that they raised their complaints with programme managers in 2010. Later that year they were suspended. They are suing KEMRI for compensation and demanding a court order for them to be reinstated unconditionally.

In submissions to the court, KEMRI says that the complaints from the six were dealt with in accordance with institutional employment policies. It also says that its staff are well paid in Kenyan terms, and that allegations of the theft of intellectual-property rights are unfair and unsubstantiated. Last week, the court asked both parties to provide more evidence; the next hearing is scheduled for 20 September.

Other African researchers at KEMRI have rallied to the programme’s defence. The programme has sponsored more than 30 Africans for master’s degrees in the past five years, and a further 35 research assistants have won external master’s fellowships totalling around £2 million (US$3.1 million), mainly from the Wellcome Trust. An £8-million strategic award from the Wellcome Trust is boosting PhD training on the programme, which currently has almost 50 PhD students. The investment puts it ahead of any other equivalent programme in the country, says Abdisalan Noor, who leads the programme’s spatial-epidemiology group. “This has saved many Kenyan students from the vagaries of chasing postgraduate funding through the limited international and national scholarship opportunities.”

“There are tensions everywhere in science — but where the former colonial master is involved, it takes on a different dimension.”

In its submission to the court, KEMRI lists a number of African scientists who were promoted and developed by the programme. These include Charles Mbogo, deputy director of the Centre of Geographical Medicine Research Coast in Kilifi, which houses the KEMRI–Wellcome Trust programme; and Gilbert Kokwaro, who went on to head the programme’s pharmacology group and is now director of the Consortium for National Health Research, a non-profit organization that coordinates health research and training in Kenya. In 2008, the KEMRI–Wellcome programme hired Kenyan malaria researcher Samson Kinyanjui as head of training to improve support for African scientists.

However, outsiders have questioned whether the programme is doing enough to promote Africans. In 2010, senior international scientists independently reviewed the programme’s application for core funding for 2011–16 from the Wellcome Trust, and unanimously deemed it “excellent”. But they also queried why the programme seemed to be so “separate” from the rest of KEMRI, and why so few senior African scientists were involved.

Some joint programmes have found it challenging to boost the number of African scientists. Not only are African researchers relatively scarce, it is often difficult for those who have trained in Africa to compete on standard metrics — publication and citation rates — with colleagues trained and well-connected in developed countries.

But a culture of openness and trust may help to avoid conflict in partnerships between African and developed countries, says Tanner, who helped to develop guidelines published in May by the Commission for Research Partnerships with Developing Countries in Berne, Switzerland. One approach, he says, is to let all partners participate in setting the research agenda.

“It’s about respect and transparency,” says Tanner. “If you have that, you can build up a good partnership.”