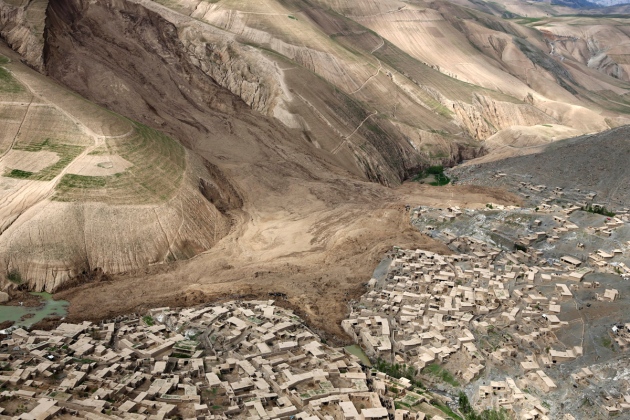 Heavy rains helped spur a massive landslide near Ab Barak, Afghanistan, on 2 May.

Dave Petley, who studies natural hazards at Durham University, UK, has seen his share of devastating landslides. But even he was startled by the scale of the 2 May disaster in northeastern Afghanistan, where a hillside saturated by heavy rains gave way above the village of Ab Barak. At least 350 and possibly more than 2,000 people died in the landslide, which came in two waves.

Petley spoke with Nature about the geology behind the tragedy.

How vulnerable is this region?

A 2011 study of northeast Afghanistan, using satellite imagery, found 34 previous examples of this type of landslide1. They are quite common. You can divide the geology in this part of Afghanistan into two different types. The bedrock is a mixture of old crystalline rocks and some younger sediments, which are mostly impermeable and reasonably strong. But sitting on top of that is a thick layer of loess, which is windblown dust from the deserts to the north. It has big void spaces between the particles, which makes it weak if water gets into it. This is probably the most recent of a whole series of landslides.

How unusual was the death toll?

About every 2–3 years, somewhere in the world we get a rainfall-induced landslide that kills more than 1,000 people. They are more common than you might think. This particular landslide is interesting because the volume of material that moved is so large. These failures in loess tend to be really mobile, moving fast and for a long way. That’s clear because the landslide has come down into the valley and spread in both directions — the valley at the bottom of the slope appears to have been buried to a depth of 20 metres or more. It was just unlucky that people were in the way.

Did the landslide create new hazards?

The landslide material has blocked the valley completely, so that water flowing down is now ponding and a lake is forming. That can be rather a dangerous situation, because when the water level gets sufficiently high, water starts to run across the landslide and flood down the valley. In the past, [in other areas], some of those floods have caused significant problems.

Could anyone have seen this coming?

The Google Earth image of the area, though it's not particularly high resolution or even recent, suggests that this landslide was easily identifiable in advance. This was an accident that was waiting to happen.

What can be done to reduce death tolls in future landslides?

About 85% of people killed in landslides [are] in Asia, nearly all in very poor countries. This is terrain that is tectonically active, with steep slopes and lots of weathering. Often there is earthquake activity that destabilizes slopes, and seasonal rainfall patterns such as typhoons or monsoons. But with appropriate programmes we can try to reduce losses.

A mapping exercise of potentially dangerous large slopes in Afghanistan would cost a fraction of the losses from this single event. When you find a particularly dangerous slope, you can have a relatively low-cost monitoring scheme where people measure the distance between pegs [to see if a hillside is starting to fail]. And then they can get out of the way when it starts moving or during periods of heavy rain.

Does the 22 March landslide in Washington state, which killed more than 40 people, show that developed countries are also at risk?

When that happened I was very taken aback. If you look outside of Asia, it was really the first event to kill that number of people in a rich country in recent years. It’s a bit difficult to understand that landslide at the moment. If you compare it statistically with previous events, it was faster than we would normally expect, and spread over a bigger area. The unfortunate thing is that despite the warnings that another failure was likely, and clear reports that suggested it was a dangerous slope, people were living in quite close proximity to it.